Whether you are despicable enough to steal the moon or defeat El Macho, your day is sure to be brightened by the bright fluorescent 165-foot-long and 55-foot-high “minion” floating all across the United States’ skies. 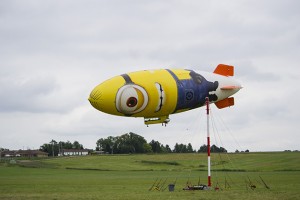 The “Despicablimp” has been on tour since March 23 in order to promote the Universal Studios’ summer premiere of “Despicable Me 2.” Over its six-month tour period, the Despicablimp will fly over 20,000 miles, three times the width of the United States.

“Catching sight of the blimp as it flew down to meet us made me feel like a little kid again,” freshman Hannah Greczanik, a fellow passenger, said. “I loved both of the ‘Despicable Me’ movies and seeing the huge minion on the side of the blimp really brought the animated movies to life.”

Hanging onto the bottom of this massive blimp is an eight passenger yellow gondola.  Inside, the gondola is similar to riding a bus, but cleaner.

There are individual chairs and a bench in the back for seating. Large windows make up a majority of the casing to create an optimum viewing experience for passengers. Hanging above the windows were headsets in order to hear and talk to the pilot as the engines are right behind the hanging gondola.

The blimp’s takeoff was barely noticeable besides the slight incline and popping of ears. The speed of the blimp stays consistent whether going up or down as the blimp simply raises and lowers itself on pockets of air.

According to Despicablimp pilot Allan Judd, blimps do not soar, fly or float, they “dive.”  This sensation of diving through the air along with the gentle rocking of the gondola made the ride as smooth as a plane and as soothing as a boat.

“The blimp ride was unexpectedly smooth and effortless, and I even told the petrified little boy who was riding after us that he would have the time of his life waving to the people on the ground,” Greczanik said.

The blimp can go as high up as 10,000 feet but usually coasts at around 1,000 feet in order for the minion to be clearly visible on the street. Being able to see the faces of people on the streets as the blimp glided through the sky was the best part for passengers as well as the pilot. 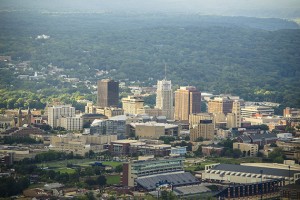 “My favorite part is all the smiling faces, both up here with us and on the ground. The kids in the schoolyard run to the nearest fence and follow you all around,” Judd said.

Judd has noticed the positive reaction the blimp has brought to people. He enjoys seeing cars pull over to get out and take pictures and referred to them as the “parkers.”

“I whistle, then count to two, then wave,” Judd said. “I have to wait for the sound to get down there.”

Judd’s positive energy, even after sitting in the same seat for nearly 12 hours a day, shows his true passion and enjoyment of flying blimps, making the experience enjoyable for people of all ages.

“I couldn’t stop smiling from the time I saw the blimp coming out of the clouds to when we stepped out of the gondola and turned to wave to the pilot after our ride,” Greczanik said.

Judd works for a company called the Van Wagner Airship Group, specializing in outdoor advertising on blimps. When approached to fly the Despicablimp, Judd jumped at the opportunity.

“The company asked me and I was delighted to,” Judd said. “When I saw the picture on the side of it, I said ‘Yeah, I got to do this.’”

A native of Geneva, Switzerland, Judd has flown blimps since the mid 1980s.

Although Judd plays a large role in controlling the blimp, the crew on the ground ensures the safety of the blimp as it lands and takes off.  A group of about 10 men stay on the ground to catch the blimp when it comes to land.

Senior grounds crewman Rob Clipp was among the men directing the blimp on the ground. After graduating with a market advertising degree, Clipp decided to join the Despicablimp crew to travel and see the country.

“I have seen the whole entire United States,” Clipp said. “I have been to about 35 states and every big city you could name.”

Clipp’s main job is to drive the shuttle van to and from the parking lot to the landing field.  He also protects passengers from the blimp as it lands by placing them in a “safe zone.”

Although some jobs might seem minor, every crewmember is needed. The Despicablimp is big enough to hold approximately 75 million golf balls, so the more hands available to help, the smoother the blimp rides become.

According to Judd, many men on the crew had no previous experience with blimps and had to be trained along the way.

While moving from tour stop to tour stop, the blimp could be up in the air for over 14 hours in order to stay on schedule.  This makes for long hours for Judd as well the entire crew.

The Despicablimp has a 220-gallon fuel tank, allowing it to stay in the air for 20 hours straight as it flies from stop to stop across the country. Unfortunately this is not the case for the trucks and cars the grounds crew were traveling in. Coordinating stops for the blimp becomes quite the hassle for the crew, especially when problems arise.

“The crew is fantastic to support the ship wherever we have gone,” Judd said.

High mountainous and low temperature areas create challenges for the blimp with the changing pressures. Judd recalled getting stuck for eight days trying to find a spot to cross through the Rocky Mountains in New Mexico between Texas and Arizona.

Even through crisis after crisis and flight after flight, Judd still keeps a positive outlook and never gets bored with flying. He always finds the silver lining, even when he is stuck 1,000 feet in the air.

“Dusk is pretty neat because you have a mix of [day and night] and the lights are turning on and from up here the sunset is spectacular.  Night is very smooth because there is not as much mixing of the air,” Judd said.

The gentle rocking of the gondola and the stunning view of the quiet world below you is very charming, enough so to stay up in the air for hours. Going on a blimp ride is an experience everyone should have at least once. Mine was made even more memorable by the Despicablimp and its welcoming staff.