The Akron Zips men’s soccer team has their first two home games next weekend. The first is against Virginia Commonwealth University’s team on Friday, Sept. 13 and the second is against San Diego State on the following Sunday.

In the preseason the Zips got off to a rocky start, winning a scrimmage with a healthy 4-1 lead against Marshall but playing poorly against 15th nationally-ranked Saint Louis, losing 2-0. These rankings are according to an NCAA poll of the top 25 college teams, which placed Akron at No. 8 and did not submit a ranking of Marshall. 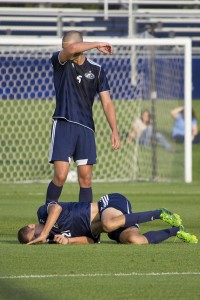 They kicked off their season with the College of Charleston tournament last Friday and Saturday. They wrestled with Charleston for the vast majority of the game but in the 80th minute they scored the first of two goals that would make their victory concrete.

After that, they played Furman, which resulted in a well-earned 1-0 victory, as the Zips dominated most of the match. This brings their record to 2-0-0 in the competitive season, and effectively combats doubts about the ability of head coach Jared Embick to keep the team in fighting spirit.

The Virginia Commonwealth University Rams have been ranked No. 24 in the country. They had some success in the 2012 season, making it to the NCAA tournament but getting thumped out almost immediately by Syracuse. This year, with the return of strong players in the midfield and defense, they look prepared to take the run they made last season further in the 2013 season.

Senior midfielder Romena Bowie (No. 10) and sophomore defender Dennis Castillo (No. 3) were both awarded placement in Topdrawersoccer.com’s list of the top 100 players in the country, making them competitors to watch for during the game.

In spite of the return of these power players, one of their top strikers, Jason Johnson, has left the team earlier than expected to head to the MLS. He scored 13 goals and made six assists last year for VCU, and his absence will surely carry a toll.

That’s not to say that the team doesn’t have other offensive options, such as Jose Manel (No. 23), who had a dangerous shot in the VCU vs. the College of William & Mary spring opener. But the general lack of edge on the offense should lead to a shortage of goal shots, and I don’t think the Zips should have too much trouble cinching this victory. 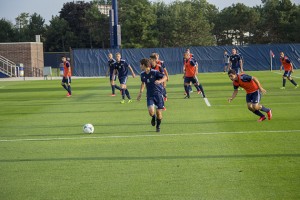 San Diego State looks to be a greater challenge. In their preseason game against Trinity Western, which ended in a tie, they had 21 shots on goal. They went on to beat neighboring San Diego University 5-0.

This team is full of high-powered, long-time players who have been together on the field for so long that they play like one collaborative organism. Accompanying this strength, SDU has been able to take huge numbers of shots in their games, which could bode ill for the Zips.

David Meves, the goalkeeper for the 2012 season, has gone on to graduate, leaving a less weathered Fernando Piña to fill his place. Meves generated 16 shutouts last year and his talent went a long way in securing the Zips’ high placement in the NCAA and the MAC.

Piña has a heavy legacy to fill and his abilities are less tested. His shutouts in the College of Charleston tournament were done in the face of low numbers of shots on goal and with a very strong defense keeping those shots out.

If San Diego State manages to squeeze a large number of shots through the Zips’ back, it’s entirely possible that Piña could buckle under the load and miss a few. That being said, this outcome relies on a failing defense and the defensive midfielders, one that I don’t expect to see. My prediction is that it will be a hard fought match, but I give an edge to the Zips.

These statements are strictly the opinions of a fan, and I’m sure the actual outcome will not be verbatim to my prophecies. However, the Zips have proven that they can play with total proficiency in away games and with the boost that comes from playing at home, not to mention the incessant rallying of the AK Rowdies, it seems improbable that their streak will end here.