Since the age of nine months, junior Daniel Slattery has been involved in Civil War reenactments alongside his family.

In their 25 years of reenacting, the Slatterys have been in over 100 reenactments. They have travelled to such places as Antietam, Md. and Gettysburg, Pa. to participate in national reenactments with over 15,000 reenactors. Daniel’s parents got involved in reenactments in 1988 after attending one in Burton, Ohio. 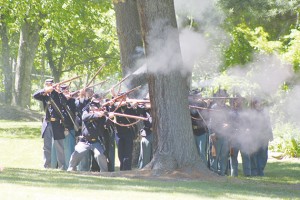 “I always had an interest in the Civil War,” said Ray Slattery, Daniel’s father. “My grandparents had a picture of my great-great-grandfather in the Civil War and there were remnants of the Civi

l War in my house because of the personal connection.”

Daniel has been in over 60 reenactments and although most of his siblings no longer participate, he keeps going.

“My favorite part is sitting around camp and relaxing. It’s nice to get away from the phone for a while and not have to worry about checking for texts or calls,” Daniel said. “Saturday nights are especially nice because everyone is sitting around the campfire and you just get to visit and catch-up with people in your unit. It is relaxing and it enables me to spend time with my parents. It really makes you appreciate the small things, such as a cool breeze.” 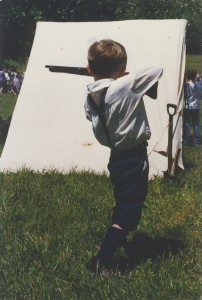 Daniel’s parents both agree that the campfire is the best part of the reenactment because they get to spend time with family and friends.

“The kids had a great time doing it growing up,” Julie Slattery, Daniel’s mother, said. “The kids would have their own battles; there were the Union kids and the Confederate kids.  It was a fun thing to do as a family.” 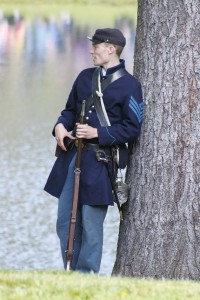 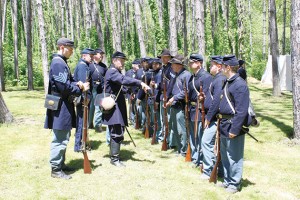 Most reenactments are from Friday to Sunday with only Saturday and Sunday being open to the public. The battles typically last up to an hour. During this time, the men are out on the field and the women and children reenactors are spectators on the side.

The captain of each company gives their men orders, gets them into position and tells them

when to fire. Ray is the captain of his company, called the 5th Ohio Volunteer Infantry.

Based around the Akron area, this company has about 10 men and five women who actively participate. In the off-months of reenactments (October to April), OVI meets up once a month to hold elections and decide which reenactments they are going to attend in the coming summer.

“We vote for who we want to be our captain, first sergeant and corporal,” Daniel said. “The corporal is above a private in rank and the company forms upon him. The first sergeant is next in rank and is below the captain. He is the highest non-commissioned officer and is in charge of keeping the troops in line. He forms up the company and commands the unit if the captain is not present or falls in battle.” 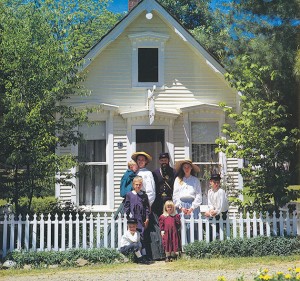 From the clothes they wear to the plates and silverware they eat with, every volunteer brings something special to the reenactments, making them seem authentic to the audiences.

“There are moments where it can be just like being there. It’s like being back in the time period,” Ray said. “Those magic moments can be really special.”

Megan can be reached at [email protected]