Police said Monday that three arrests have been made involving the riots at Sumner Fest held on Labor Day weekend on Sumner Street near The University of Akron campus.

Two of those arrested were University of Akron students, police said.

As partygoers celebrated the last weekend of summer, police responded to riots at the 400 block of Sumner Street around midnight on Aug. 31, where the partiers had trashed and flipped a parked car.

The party, known by many University of Akron students as Sumner Fest, was broken up by police officers. The police were hit by beer bottles and cans upon arrival. Police eventually used tear gas on the partiers.

Police reported that items were being thrown at parked cars in the streets and a vehicle belonging to Gabrielle Lewis, a young woman in attendance at the party, was flipped.

According to the website gofundme.com, Lewis’s vehicle was “lit into flames where several people threw solid objects breaking the headlights, smashing the windows with bats and throwing what looks to be like firecrackers inside of the vehicle, causing the vehicle to catch fire.”

Her boyfriend’s sister, Jackie Cahill, created the donation page because her insurance is allegedly not covering any of the damages.

At press time more than $1,500 dollars in donations were raised. 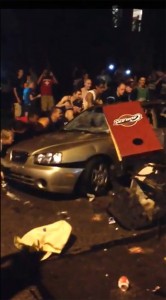 According to Assistant Vice President for Campus Safety and Chief of Police Paul Callahan, a UA student was arrested on Friday.

“People volunteered some of their very own videos that they took and from that information, we were able to come up with the pictures that were posted on the City of Akron Police Department’s webpage. We have since received tips from the community to help identify the suspects,” Callahan said. “It was critical. We were not undercover working at that block at the time so there was no video that we produced. Everything came from the citizens … the kids that were involved were in the area.”

Lt. Melissa Schnee from the Akron Police Department said Timothy Wallette, 22, was arrested on the night of the party on Sumner Street on the charges of disorderly conduct and failure to disperse.

Schnee confirmed on Monday afternoon that UA students Timothy A. Wallette, 22, from Mentor and Nathan K. Knutty, 20, from Massillon were arrested and charged involving the riots.

Knutty was charged with rioting but was released after receiving the summons.

Ryan W. Malecha, 19, from Litchfield was arrested on Monday and is still in police custody at press time. It is unknown if Malecha is a
UA student.

Police officials said the investigation is still ongoing and additional charges could be filed.

The students are also in the process of being referred to Sudent Judicial Affairs. To avoid a repeat of events that occurred on Labor Day weekend, city officers worked a special detail of Akron Police, UA Campus Patrol and state highway patrol officers around the southern edge of campus over the weekend.

“Friday night we had an additional 18 officers working that area and there were 24 officers that worked in on Saturday,” Callahan said. “We had a lot of interactions with the community this past week about what was to be expected and what was going to be permitted without criminal charges being filed against the people who were either putting on the parties or committing illegal acts at the parties or near it.”

“It is our number one priorty that our students feel safe in their living and learning environment,” Denine Rocco, The University of Akron’s dean of students, said. “Certainly that affects all that they do. We work hard to make them feel that way. There are off-campus student service departments that have had a greater presence in that community over the last two years than it has in years past. We have some street teams out in the Roo buses providing information for students who live in our off-campus areas to let them know how to contact the police. Just reminders of personal safety and looking out for one another. Not being out alone on the streets at night. All the general things that students forget because they feel so safe in their communities.”

Rocco said she was very impressed by the UA students’ reaction to the violence.

“I was extremely impressed by the call out of our students that this was unacceptable behavior,” Rocco said. “Students were embarrassed by the actions of a certain few, some who we may find out were students and some who were not students. So the student body that has come together to help that young lady is something that we should be very
proud about.”

Callahan said that he really wants UA students to be aware when they are at parties of “everything that could possibly go wrong for them if they are not prepared.”

Rocco said she wants UA students to be responsible and make good choices.

“We want to echo our students that the actions that occured over there are terrible and it was an embarrassment to them and to the university and they didn’t appreciate it,” Callahan said. “That just goes to show that the majority of the students here are good, decent students and are here for the right reasons. Some of the things that occur off our campus they have no control over but they can have some input into how it is handled and we appreciate it. We want to make sure they know that we appreciate their help.”