Zips head to the Big House

Saturday afternoon, The University of Akron men’s football team will travel to Ann Arbor, Mich. to face the University of Michigan Wolverines for the first time in school history. This is the first Big Ten Conference team that the Zips have faced in the past two years and the first team to be ranked in the Associated Press top 25 poll the week of playing Akron. The last ranked team to play Akron was The Ohio State University in the opening game of the 2011 season, where the Zips fell 42-0.

The Las Vegas Insider currently has the Zips placed as five-touchdown underdogs in this matchup against the Wolverines, and though victory may seem an impossibility for a team that has had four wins in nearly three years of play, there are several matchups to watch and developments to keep note of. The performance of the Zips in this game may be more meaningful than simply a loss on the record, if the team can manage to play a respectable game.

The Zips head into Saturday’s game with a 1-1 record coming from an exciting 35-33 win against James Madison University. The Zips showed incredible potential on both offense and defense that they will likely look to build upon the rest of the season to gain a few more wins. 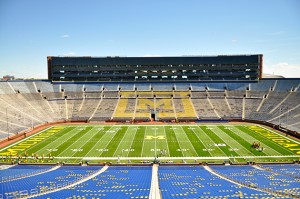 The most important observation is that for the first time under head coach Terry Bowden’s Akron career, the Zips were able to pull off a close win and to hold their opponent on key downs.

That particular observation has been one that Zips fans have been longing to see for almost three years.  The Zips have consistently buckled under pressure, losing every close game. Hopefully the team can build off the success from last Saturday and realize that they have the ability to come up big on crucial plays.

The first improvement that Akron absolutely needs to see against the Wolverines is discipline. So far this season the Zips have given up 119 yards on 13 penalties, according to Akron’s Department of Athletics’ statistics. The Zips have to improve on this stat alone, or it is going to be a rough season once conference play begins.

Football is won and lost by the swing of the pendulum of momentum. The most disciplined team is going to win the game and the Zips have yet to prove that they can play as a disciplined and cohesive unit.

Arguably the Zips’ most exciting game of the 2012-13 season was a road game against the University of Tennessee Volunteers. The Zips were tied with the Volunteers at halftime and within seven points at the beginning of the fourth quarter. In that game, the Zips showed that they had the potential to play a statistically superior team in a disciplined manner. In turn, the discipline led to a close game.

The second thing that Akron must improve on is avoiding turnovers. The Zips have to find a way to prevent turning the ball over. Akron fell behind early both games so far this season, largely due to turnovers. So far this season the Zips have turned the ball over twice because of fumbles and four times due to interceptions. The Zips absolutely must aim for a clean game against Michigan if they hope to keep the game interesting.

Lastly the Zips must consistently move the ball. The most glaring problem of the 2013 Zips’ offense is the inconsistency to move the ball while either running or passing. Last season the Zips had one of the fastest, up-tempo offenses in the NCAA. This year it appears to have slowed and sometimes flows at a disjointed rate.

Running back Jawon Chisholm reasserted himself as the Zips’ primary runner last week, rushing for 87 yards on 11 attempts. The production of the entire running game will have to improve, however, if the Zips intend to have any interesting game against the Wolverines and if they intend on winning more games this season. The running game is headed by Chisholm at the moment, however he still has to prove that he is deserving of that position.

The Michigan Wolverines may outmatch the Zips at almost every position, however the speed and production of the offense can help level the playing field.

The No. 11 University of Michigan Wolverines come to Saturday’s game after an exciting win over last year’s national championship contenders, the University of Notre Dame. 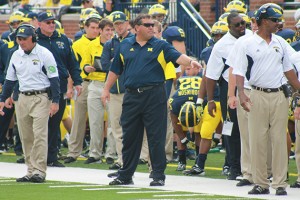 Zips fans should expect to see a pass-happy Wolverines team early in the game, followed by a strong running game that will feature a “running-back-by-committee” style of play as opposed to one featured back.

The key note here is that Akron is clearly outmatched at almost every position, but little plays at key positions in the game may help the Zips keep the game interesting.