Loving to hate the government

Bashing our government has become a pastime as American as baseball or apple pie. Negativity toward our government is everywhere and is screaming in our faces constantly.

Facebook is always buzzing with opinions on our government and about issues such as gay marriage and abortion. Government bashing can be found on Twitter, cycling through our news feeds and in the trending topics column. 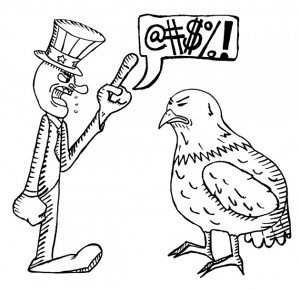 It’s in the headlines of articles, on TV and talked about regularly amongst groups of American citizens. We Americans just love to hate our government.

It’s easy to wonder, though, if we as American citizens have lost all respect for our country and what it gives us. Shouldn’t we as the people of this great nation take pride in our country? Respect our president instead of mock him? Take pride in the fact that we’re coming out of a recession? That we are starting to see job growth? That every day our government protects us from terrorist attacks? That our supreme court is overturning unfair bills like the Defense of Marriage Act?

Sometimes I really wonder if the answer is no. The fact of the matter is, I wouldn’t be writing this article and you wouldn’t be reading this paper if it weren’t for the opportunities our country gives us.

For example, there wouldn’t be any students, teachers or The University of Akron itself if our country didn’t allow us to seek higher education. Everyone almost gets a fair and equal shot at bettering themselves through their education by the student loans and financial aid that our government provides.

Even though the system isn’t perfect, at least we have the opportunity to get a college education and study what we want.

We can express ourselves in any possible way we want without the fear of our government retaliating. It’s a beautiful thing and one that is often taken for granted by us.

I’m not trying to convey the message that our government is some holy being that we must follow alongside blindly and never speak badly of. We all are very aware that our government doesn’t exactly always make the best decisions and can screw us over from time to time. But what we should do is have respect for our country and our government because without it we wouldn’t have the freedom and safety it provides us with.

This past weekend videos of Syrian citizens being chemically attacked by their government surfaced. The graphic videos were terrible to watch, but even worse, it was only a small look into what the current situation in Syria is like.

Yet here in America, we have the audacity to complain because the government might be reading pointless emails and recording phone calls. If that is really the worst thing our government can do to us, I think we can all survive and be able to live another day!

The National Security Agency’s spying could be compared to an overprotective mother who is checking up on her child. If she happens to find incriminating texts, then she must take action. If not, she simply sets the phone back down and walks away.

If the government is spying on its citizens in order to protect them from harm, then how much wrong is it really doing? If it saves us from any kind of harm, isn’t it worth it? If the government can prevent one attack that would kill innocent people by simply looking at phone calls and emails, it’s hard to bad-mouth it.

Nothing on this Earth comes without its faults, and the United States of America is no exception. Americans can either choose to focus solely on those faults or they can accept them for what they are and look beyond them. As American citizens we have the freedom to regard our country in whichever way we choose.