SFL fights for its life

When asked why she joined SFL, Secretary Jacqueline Culley said, “Passion for life. It’s about respecting every individual, who they are and who they can become.”

According to studentsforlife.org, “the mission of SFLA is to end abortion by educating students about the issues of abortion, euthanasia and infanticide; identifying pro-life student leaders; equipping student pro-lifers with the training, skills and resources to be effective and successful; and promoting student activity to other local, college and national organizations.”

SFL president Carly Conklin said her passion for life and for education are the reasons she became involved with the organization.

“I think education is one of the main missions and breaking through the apathy on campus as well,” Conklin said. “There are a lot of people that feel the same way, with the same morals and values as our group, who are just not ready to stand up yet. We want to find them and help them out.”

While tabling Monday in the Student Union, Conklin recruited students and offered postcards from SFLA addressing issues like rape, incest, stem-cell research and human trafficking. Besides tabling, SFL holds peaceful protests known as “Sidewalk Saturdays” and attends marches like the March for Life and the “I Vote Pro-Life” bus tour.

SFL also holds an annual baby shower. Members are asked to bring a wrapped gift, like bottles or diapers. They play baby shower related games and unwrap the gifts, which are then donated to local mothers in need of baby supplies. 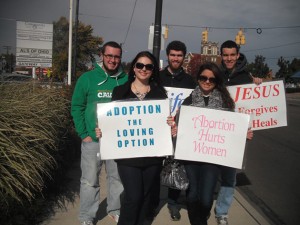 This Saturday is SFL’s first event of the fall semester. In honor of the National Day of Remembrance for Aborted Children, SFL Vice President Daniel Redle and other members will begin peacefully protesting at 10 a.m. this Saturday in front of the Akron Women’s Medical Group located at 839 E. Market Street in Akron. There will be special parking for anti-abortion protestors in the lot behind Taco Bell on East Market Street.

Redle said in an interview with The Buchtelite a memorable experience he had during a previous peaceful protest at Planned Parenthood. A young man with his girlfriend approached the group and asked them for their help. The man took their pamphlets and other information as they expressed they wanted to discover other options.

“He was very receptive and willing to look at our information,” said Redle. He thinks they could have potentially changed this couple’s mind about abortion.

For coverage of this weekend’s SFL event, see next Thursday’s issue of The Buchtelite.