The University of Akron College Republicans placed 3,000 flags across campus this week in remembrance of the 9/11 terrorist attacks. 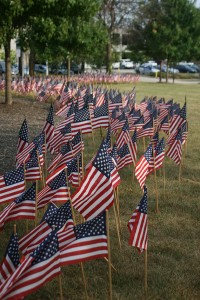 Alyssa Bailey, president of the College Republicans, said that this event was to honor all those that were lost in the attacks and those that have lost their lives since as a result.

“We need to keep the memory of the attack and how it hurt each individual in the country,” she said.

Bailey said that it took the group two and a half hours to place the flags. The group has displayed the flags across the campus almost every year since 2001.