This week, Bierce Library celebrated Banned Books Week with student-designed displays and programs, which included readings of excerpts from challenged and banned literature.

Every year, there are thousands of attempts to remove books from school and library shelves. 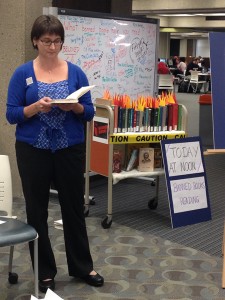 Andrew Golden, a graduate student in the School of Communication, said he thought “it was outrageous and unnecessary that school boards and administrations would ban books to protect children from making positive academic choices.”

“Young adults ought to be making critical decisions about the academic content that they choose to use,” Golden said. “By banning books we send a message to kids that says, ‘we want you to read, but just not these particular books.’”

“Honestly,” Golden said, “I think librarians are just happy kids are reading books at all these days.”

The American Library Association’s Banned Books Week is an annual event celebrating the freedom to read. Typically held during the last week of September, it highlights the value of free and open access to information.

Banned Books Week brings together the entire book community – librarians, booksellers, publishers, journalists, teachers and readers of all types – in shared support of the freedom to seek and to express ideas, even those some consider unorthodox or unpopular.

According to the American Library Association (ALA), between 2000 and 2009, books were mostly challenged for having offensive language, being sexually explicit, violent, unsuited for an age group, having homosexuality, a religious viewpoint or occult/Satanism. The initiators of these challenges were most often parents, followed by patrons and administrators of schools, school libraries and public libraries.

Some of the most challenged popular classics include books that were assigned to many students in their high school English courses, such as: “The Great Gatsby,” “To Kill a Mockingbird,” “The Lord of the Rings,” “Lord of the Flies,” “The Color Purple,” “Animal Farm,” “1984,” “Of Mice and Men,” “The Catcher in the Rye” and “Gone with the Wind.”

Students may be most familiar with this year’s freshman reading assignment, “The Glass Castle,” a memoir by Jeannette Walls.

“The Glass Castle” was challenged in multiple school districts by parents for including explicit language and references to child molestation, adolescent sexual exploits and violence as it recounts the author’s experiences growing up with an alcoholic father and a mother who suffered from mental illness.

“I think when people encounter things that challenge their beliefs it can be scary for them,” Lazar said. “I think there can sometimes be a desire to sanitize things. You don’t want to sanitize reality.”

High school students under the age of 18 who are seeking to use The University of Akron’s Bierce Library are required to have a parent or guardian sign a permission slip in acknowledgment that their student may be exposed to adult-themed, academically free literature.

All events are free and open to the public. Another excerpt reading by faculty, staff and student volunteers will be today from noon to 1 p.m. in the Bierce Library lobby.

For a list of the top frequently challenged books, visit: http://www.ala.org/bbooks/frequentlychallengedbooks/classics