Apple’s iOS 7 came out last week, changing iPhones everywhere. iOS 7 is Apple’s first complete software revamp for the iPhone since its release in 2007.

Former iOS upgrades came with some minor changes and updates to the original design and also added new apps like Passbook, Reminders, Newsstand and Maps. iOS 7 is Apple’s first real attempt to improve the iOS system as a whole, and so far it seems to be quite a success.

When it came to upgrading to iOS 7, downloading time and space was an issue. 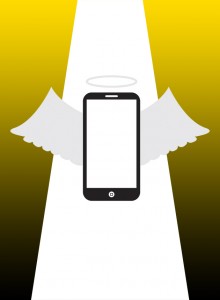 For my iPhone 4, I had to wait for over two  hours for it to download and install.

I also had to delete 2.9GB worth of material from my phone in order for it to download, which is quite a bit of space if you only have 16GB to begin with. Though at least for me, deleting a few old songs and an Angry Birds app was a small price to pay for the new system.

The first thing that strikes users when they turn on their phones is the new sleek and vibrant eye-catching design. The lock screen is no longer crowded with black boxes that take up most of the screen.

Instead it has been replaced with a full picture display that shows, at the top, the time and date and, at the bottom, the “slide-to-unlock” system, which is almost transparent.

The home screen is just as lovely and gives the iPhone a more accessible feel. The new search bar is much more convenient, coming down from the top of the screen instead of on another page.

The notification screen has been vastly improved, becoming less cluttered and easier to follow.

The Multitasking feature is amazing and allows the user to see not only the application’s icons but also their opened pages as well.

People can also close multiple applications at the same time by just swiping their finger in an upward direction.

The design is a thousand times better than the former one, which consisted of an annoying task bar that was endlessly filled with tons of applications.

The new control center is a much-needed addition to the phone and can be accessed by users simply sliding their finger up across the screen.

Users no longer have to go to their settings application to access settings like WiFi, brightness and airplane mode.

They also now have instant access to the calculator, alarm, camera and a new flashlight feature.

The iPod has been changed for the first time in many years, and what an improvement it is. The artist and album artwork are actually visible and easier to locate.

It runs smoother and makes it simple to repeat, shuffle and create playlists while listening to music. Apple has also finally added a radio to the iPod, which allows users to listen all different types of stations.

The applications have also been redesigned; though most of the non-Apple applications seem to have not caught up with the new design yet. So far YouTube’s application is the only one I’ve come across that has really utilized iOS 7’s design.

The most exciting change to the applications is Apple’s new feature that allows them to automatically update.

No longer will users have to see their App Store application with its tiny red bubble filled with an outrageous number of updates. It’s a very small improvement, but one that was well overdue and is very convenient.

Many people have argued that this feature has been taken from Android’s software system. Considering Android did create this feature first, it’s very probable that Apple did base their own off of it.

In fact, Apple has gotten quite a bit of flack by Android lovers, who claim that they based most of their iOS 7 design on Android’s operating system.

As an avid iPhone user, it’s hard to tell.

Apple seems to have taken what they already had and simplified it while also making it more visually appealing.

The home screen and lock screen are of typical iOS design; they have just been redesigned to function better.

Safari’s new browsing system has outdone itself and is much more efficient, but once again just an extension of what it already was.

The same can be said for the iPod and applications, which have just been improved to give users a better experience visually and technically.

Perhaps Apple’s biggest flaw with iOS 7 isn’t the so-called “imitation”, but the amount of time Apple took to create it in the first place.

We’ve seen little from Apple’s iPhone that has impressed us for a while.

The iPhone 4S gave us nothing other than Siri, and the iPhone 5 gave us nothing besides a bigger screen, slimmer figure, and a faster processor. iOS 7 finally gives us that “wow” moment we’ve been looking for, but it also makes us wonder why it took Apple so long to design it.

For instance, while the new iTunes Radio is great, it simply mimics apps that have been around way before it, like Pandora.

It seems sort of late in the game for Apple to unveil their iTunes Radio app as an attempt to awe everyone.

The same goes for the new Flashlight feature in the control center, which has been accessible through apps for at least two years.

Little things like the control center itself, the Multitasking feature and the notification center should have been a part of the iOS system a long time ago. Instead of creating a more user-friendly system like iOS 7 for their products, Apple has put too much focus on creating new iPhones like the 4S and the 5.

Thankfully for Apple, iOS 7 seems to be a win and is an amazing software system. It definitely serves its purpose and has given the iPhone a fresh new look.

Users can rejoice in finally having the updates they desperately needed. iOS 7 gives iPhone users everywhere a chance to fall in love with their phones all over again.