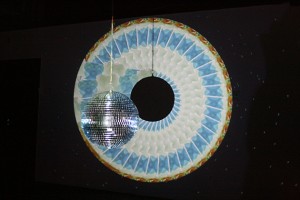 Plenty of time was spent in the dark last Thursday at the annual Akron Film+Pixel Night, where New Media students from The University of Akron had a chance to display their work at Summit Artspace.

The evening started off at the Akron Art Museum with six short films by Northeast Ohio filmmakers.

The films ranged from biographical to fictional, silent to musical and dark to heartwarming.

After the films and a brief Q&A session with each filmmaker, guests were led one block up East Market Street to Summit Artspace, a gallery and studio dedicated to supporting local artists and displaying their work.

Guests climbed single-file up the stairs to the “Pixels” portion of Film+Pixel Night, a new media exhibit by University of Akron artists.

“New media” is a genre that combines traditional forms of media like film, images and music with computers and the Internet for a more interactive experience. Featured artists were Alex Bach, Anita Marquart, David Swirsky, Sharon Shapiro and Keith Swanger.

Dr. Eunsu Kang, who brought the New Media minor to Akron in 2010, said they call audience members “participants” because they complete the exhibit by interacting with it.

Around the room, some of the students’ projects were projected on the walls while others were set up with computers and keyboards for guests to experiment with. A cacophony of music and sound effects rang throughout the room, and spectators could be seen at various exhibits tapping at keyboards or gesturing in front of motion-sensors and projectors.

The free event drew people of all ages, from young children to students to older adults. 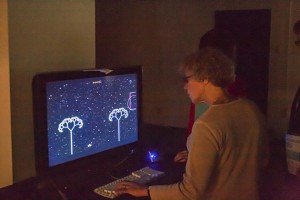 New Media artist Anita Marquart described the reaction of one child, who was “trying to fly with the flowers” on a display. Other children played with their shadows on the walls and marveled at the moving images and colors around the room.

Adults could appreciate the artistic side of the event while also enjoying the fun, interactive aspects of the exhibits.

“A group of ladies did a ‘Charlie’s Angels’ style photo shoot in front of my large projector piece. I thought that was pretty funny,” Alex Bach, another artist in the show said.

One of the most popular exhibits was the Oculus Rift virtual reality headset, which was available for guests to test out for themselves. Spectators crowded around the display, which featured dual screens to go with the bulky, eye-covering screen on the headset. 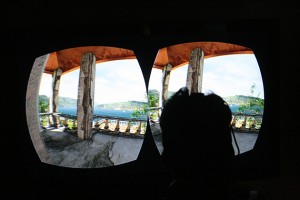 Marquart said her project, “Simple Continuance,” was inspired by a reflection she saw from her sewing machine’s flywheel during work on a quilt. The project itself involved using different programs and codes to edit images and make “mini movies,” which were clipped together for the final project. It depicted a circle of images that rotated and changed patterns.

“I guess this project was a ‘labor of love’ and ‘trial and error’ in many aspects,” she said. “There are so many little things that go into making this project, and I continue to learn.”

Alex Bach had two pieces in the show: “Color Perspective,” a large projection piece that changed colors, and “Complexity,” which showed animated lines, circles and squares that moved when guests used the provided keyboard. Music accompanied both pieces. Like Marquart, Bach said he got the inspiration for both of his pieces from simple ideas.

All around, there was praise for the artists involved, as well as Dr. Kang, their instructor. Kang currently teaches all of the New Media classes at The University of Akron, and also adds to the program’s curriculum and student activities.

“All of the students have worked so hard on their projects and it is a reflection of their instructor,” said Marquart, who also commended Kang’s creativity and dedication to the program. 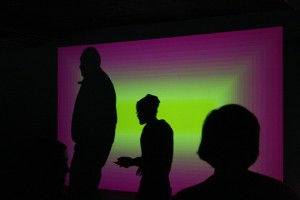 Kang arrived at the university in 2009, and the interdisciplinary New Media minor was approved in June of 2010. The minor, Kang said, was made possible with support from professors from other departments such as Music, Communication, Art and Computer Science.

“I think people should be interested in New Media because in the presence of this work a viewer is taken out of their daily norm and exposed to these new possibilities in audio, visual and interactive art,” Bach said of the program.

While this was the New Media program’s first exhibition at the Summit Artspace, Kang said New Media projects have been featured in the lobby of the Akron Art Museum before. She said involvement in the next Film+Pixel event
is probable.

“It’s a precious place where cutting-edge works by New Media students and artists can meet the enthusiastic public of Akron,” she said.

The New Media minor is open to students of all majors, and interdisciplinary work is encouraged. More information on New Media at UA can be found at http://www.uakron.edu/newmedia/ and https://www.facebook.com/newmediaprogram.

More information about Akron Film+Pixel and upcoming events can be found at akronfilm.com.