Pin it on the coaches

The Akron Zips football team visited Bowling Green State University Saturday afternoon, looking for their first win in four weeks and came up empty handed, 14-31. Despite the final score, the Zips had a 14-3 lead early in the game against the Falcons.

The blame for the loss can be put on many different aspects of the Zips’ game, however, most of the blame must be shouldered by the coaching staff. The loss to Bowling Green should serve as evidence of the failure of the Akron coaching staff. 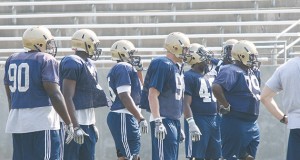 Who was in charge of the Zips’ play calling in the second half is questionable. Was it head coach Terry Bowden or offensive coordinator A.J. Milwee? It also seemed entirely possible that the coaching staff was either taking pointers from Pat Shurmur, the former head coach of the Cleveland Browns, or Rob Ianello, the  former head football coach of the Zips. The questionable play calling makes it difficult to separate them all from each other.

It was like watching a rerun of a train wreck. The Zips saw an almost identical scenario within the last seconds of the game against Michigan, where the coaching staff made an equally questionable call to run to the side as opposed to straight up the middle.

It seems extremely questionable, because if you fail to get the ball in on the half-yard line on two tries, the other team will start on the exact spot you ended on. The Zips, however, came away with no points and gave the ball to the Falcons on the 20-yard line, which turned into an 80-yard drive for a touchdown.

Resorting to field goals when the team is down by over a touchdown in the fourth quarter is essentially quitting. The difference between winning teams and losing teams is the drive to score touchdowns when it is needed.

Again in a loss, there are many things the Zips did right. For starters, the Zips were able to solve their first quarter offensive blues by scoring 14 points. Kyle Pohl showed great wear, taking a rough hit in the second quarter and playing the rest of the game.

It cannot be said enough: the Zips have to start winning games. This season is a turning point for the Zips’ football program. The program cannot afford another 1-11 season, and losing close games is not enough to keep what few fans are still interested.