With the leaves falling and the Homecoming Court ready to take center stage, The University of Akron will host Ohio University on Saturday at InfoCision Stadium. 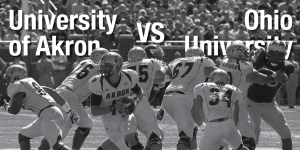 Their run game is behind Ryan Boykin and Beau Blankenship who both have 51 carries for 201 and 179 yards respectfully. They each have two touchdowns.

The defense for OU has recorded eight sacks and four interceptions, one of which has gone back for a touchdown. They also have the No. 86 ranked total defense, giving up 423.5 yards per game. Ben Russell is the Bobcats’ leader in both total tackles with 27 and sacks with two.

Akron head coach Terry Bowden said that he feels his team has had letdowns and it needs to allow coaching.

“Now we’ve got to go out there and play four quarters. They have to continue to let us get angry with them and get on them and push and keep their spirits up…” Bowden said.

The Zips are led by sophomore quarterback Kyle Pohl, who for the season has a 60.5 percent completion rate. He has accumulated 1,072 yards.

Pohl, behind his offensive line, has only been sacked three times this season, among the lowest in the country for sacks allowed.

Akron’s top receivers are sophomore Zach D’Orazio and junior L.T. Smith. D’Orazio has caught 18 balls, four of which have been for touchdowns. D’Orazio has an average of 14.2 yards per game and a total of 256 yards for the season, while Smith has had 13 receptions for 255 yards with one touchdown, according to Akron Athletics.

The rushing game has been strong as well. Jawon Chisholm and Conor Hundley are going strong in the back field. Chisholm is averaging four yards a carry and overall recording 227 yards, while Hundley adds 159 yards for an average of 4.4 yards per carry to the mix.

On the defensive side of the ball, the Zips have five members of the defense with 20 or more tackles this season. With defensive back Malachi Freeman and safety Anthony Holmes recording 31 tackles each. Other  players on the defense to watch out for is C.J. James, who, with 24 tackles and four sacks for the season,  is among the top in the NCAA. Nico Capon has three sacks coming into the sixth week of the season.

Brandon Davis, a senior who majors in education, said that he knows that his team is close to breaking through.

“This game should be good. I am seeing a lot of effort from [Akron] and it’s just a matter of [time] before we start winning a few more games within a season.” Davis said.