The adventures of commuting

I got flipped the bird today. Somebody gave me the finger. I was in traffic, attempting to be a gentleman, and somebody flipped me off.

It was shocking. Here I am, trying to help somebody out, demonstrating basic human empathy, and I am suddenly presented with the unrepentant middle finger of a cantankerous old woman driving a purple minivan.

She also called me “jackass.”

That hurt my feelings.

Commuting to campus can be quite the adventure. 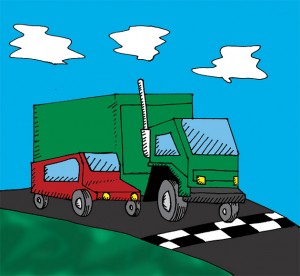 I’ve been flipped off, late and even lost. I’ve traversed detours, witnessed accidents and one time I got in a street race with a garbage truck.

I’ve coasted through mysterious Akron neighborhoods, searching for a gas station only to have my car tap out four miles from the nearest Circle K.

I have jogged four miles, in the rain, just to find out that a homeless man lied to me.

I’ve been given a free container of fuel by a kindly gas station attendant/possible pimp who then gave me a ride back to my car.

Even the day I started writing this article was standard fare.

I awoke, decided it didn’t matter whether I showered, contemplated dropping out of school and jumped in the car.

There was an accident on I-77 but that’s not unusual. I was on Route 8 and it was packed in, bumper to bumper, which is unusual.

As it turns out, the closer you get to campus, the less intelligent the average driver becomes. There was a van in the middle lane trying to get to the Fountain Street exit.

I recognized that if I didn’t let her in that she wouldn’t make it, so I left room for her in front on me.

But she didn’t seem sure if I was going to let her in. We made eye contact and I gave her a thumbs-up.

She gave me the finger.

She stuck it out her window as she pulled in front of me and kept it out there until we reached Carroll Street. We made eye contact again when I pulled up beside her.

Exasperated, I mouthed, “why?”

She rolled down her window as the light changed and, pulling away, I heard a high-pitched, “Jackass!” ring out above the racket of the traffic.

But she had no way of knowing that.

I don’t have the best luck on the road but commuting is still worth it.

I live at home (ladies) and it just makes more fiscal sense. Despite all the obstacles, it is the best option for many students.

Yes, gas is expensive. You have to wake up earlier than most; earlier still if you want to park on this side of the equator. The traffic is terrifying and you get to do it all again when you go home.

But there are some advantages.

It’s a quiet time to mentally prepare for your day. You get to keep all your stuff in your car when you’re not using it.

And if that doesn’t stuff your egg roll, it doesn’t cost anywhere from $6,956 (Bulger Suite) to $9,308 (Exchange Apartment) an academic year. It costs much less, obviously.

Let’s be honest, I mean, you’ve read the article.

If I could afford to live on campus without selling MY kidneys and YOUR kidneys, I would. Commuting is awful!

But it’s also much less expensive and it doesn’t matter how many people give me attitude and sass, I’ll always take the choice that costs the least.

I guess the moral of the story is this: Don’t get in a race with a garbage truck; they’re much faster than they look.