The Hawks, who were out-shot by a lopsided 27-6 count, ended Akron’s NCAA record-setting conference unbeaten streak of 49 games with a 2-0 win. 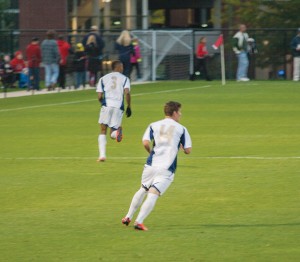 This was the Zips’ first regular season conference loss since the 2006 season.

The Zips came out strong in the first half, dominating the field. They barely allowed Hartwick across midfield, holding them to just one shot in the first half. The Zips posted nine shots, four of which were on target, along with 10 corner kicks; all without scoring a goal. In the second half, Akron came out even stronger, posting 18 more shots, nine of them on target, but still could not get past goalkeeper Mateo Munarriz and the Hawks.

Munarriz had a career match, saving all 13 shots on goal by the Zips, including Reinaldo Brenes’ penalty kick in the second half. No matter what the Zips attacked with, Munarriz seemed too much to handle.

In the second half, Hartwick came out strong, pushing the Zips to the brink. And in the 65th minute with the game still tied 0-0 Hartwick would take advantage of 6’4” Kit Tregear’s header over Zips goalkeeper Fernando Piña near the far post, giving Hartwick the 1-0 advantage.

The Zips continued to increase the pressure in the second half, adding 10 shots and four corners in the last 25 minutes of play, including a shot that barely deflected over the bar by Munarriz in the 72nd minute.

As the game edged closer to the final whistle, the Zips would have their best chance at tying the game at one a piece, as star forward Reinaldo Brenes, who was named MAC Male Student-Athlete of the week,  would step up for a penalty kick. It took place at the 85th minute mark. Brenes bolted his shot toward the right goal post, but Munarriz continued his astonishing performance with another amazing save to hold Akron scoreless once more. 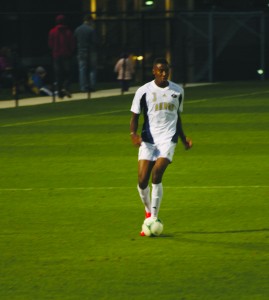 Mere seconds would pass before the second goal for Hartwick came. Marc Russell would sprint nearly 40 yards, attacking a lopsided Akron defense. Piña blocked off Russell from the left side push, Russell passed the ball right pass the Akron defender, opening the right side of the goal for an easy tap for Chris Walter.

The Zips never could break down goalkeeper Munarriz and the Hawks’ defense, giving Hartwick the 2-0 victory.

The Zips will be looking to recover on the road this Wednesday as they head up north to take on Cleveland State (3-8-0) at 7 p.m.