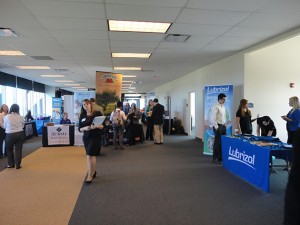 Students around campus dressed for success for UA’s Career Fair Week as they met with employers at the Engineering and Science Fair on Tuesday and the All-Campus Career Fair on Wednesday.

Over 100 employers attended each fair.

Because there were so many employers interested in meeting students at this year’s engineering fair, the fair was moved from the Student Union to InfoCision Stadium. According to the UA website, the number of employers was so large that some had to be turned away.

Also being held this week is the Graduate and Professional School Fair in Student Union Ballrooms A and B from 3:30 p.m. to 6:30 p.m. on Thursday.

For a look at the University of Akron co-op program and the benefit it provides for engineering students, look in next week’s edition of The Buchtelite.