People are free to enter national places such as the Smithsonian, the National Archives, beaches, museums and parks. But when the government closes, these places will be closed as well. 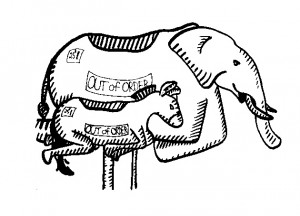 But why? What’s the point of paying taxes if the end result is a government that closes parks because it doesn’t know how to agree on a budget?

The current parties are so petty. The Democrats want their new healthcare law and the Republicans want everything but that.

Any crisis will be distorted by their disagreements and it ultimately harms us. But we don’t really have a say in that matter now do we?

Yes there’s public outlets and you get to vote for your favorite representative, but look where that’s led us.

The whole reason for things like government regulation and Obamacare is because it’s what the “majority” wants.

The “majority” doesn’t even work because it’s just the loudest voices for either side of the aisle.

Those loudest voices, right now at least, want more government regulation and the Democrats are fine with giving that. But it isn’t as necessary as people think it is.

There was a time when citizens went from dirt farms and went into factories to be blindsided by corruption and abuse and we needed a Big Brother then, but we’re different now.

The world has changed and society has grown up. There are so many resources and reservoirs of knowledge that any one citizen could be a lawyer, a baker, a writer and a linguist.

It’s people who can act independently in improving and innovating their world. Every person is a business, but we are afraid of so much. Yet this is what capitalism is, it’s what the free market is, and, to an extent, life itself.

If we want a better health care then we shouldn’t ask the government to supply it, we should let ourselves, as the customers, regulate the
market.

Buy what you want to buy, don’t buy what you don’t want to, there’s enough room for all.

Government regulation is fighting against supply and demand by allowing what the “majority” wants. The whole reason for drug wars is because  “majority” doesn’t want certain substances legally sold.

If you harm others in your activities then you should be punished, but do whatever you want with your money knowing the consequences.

Once this shutdown lifts after whatever compromise takes place we should all step back and ask, really ask, what our leaders do for this country.

Keep an eye on history too.