Every Sunday at about 4 or 5 p.m., this is the phrase that my father and I always say to each other. And that’s because we would have just finished watching the Cleveland Browns play, and most likely lose, a game. 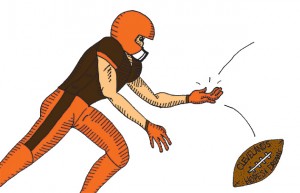 The life of a Cleveland Browns fan is never an easy one. While some other fans can look forward to a new season with their heads held high, knowing full well that it is likely their team will make it to the playoffs, Browns fans aren’t so lucky.

The Browns fans instead enter cautiously into the new season, stepping lightly with small statements like, “Well, we have a new quarterback.”

But what they don’t, or shouldn’t, do is make assumptions about how the season will go. After all, how can one judge whether a team will make it to the playoffs or not when the team has done nothing to even prove that they were remotely capable of it?

As someone who was born and raised in Maryland, people always ask why my brother and I are Browns fans.

We always reply that it’s because our dad was born and raised in Ohio as a Browns fan, so we just followed suit.

And I would never change my choice. I love being a Browns fan and no amount of losses will ever change that.

One of the great things about being a Browns fan is the fan base itself. The Browns fans are some of the most loyal people around.

There’s a video online called “Factory of Sadness,” where comedian Mike Polk yells at the FirstEnergy Stadium, saying such things as “We don’t want you to be good, we just want you to be
watchable.”

He goes on to explain that the fans aren’t expecting the team to win the Super Bowl but they would like them to play better than a “division three high school football team.”

As the video ends, Polk yells, “You are a factory of sadness!” He pauses, then says, “See you next Sunday.”

The video was made in 2011, but the feeling has remained. The fans get angrier and angrier as each week comes and goes with a loss, but they never stop watching.

And that’s why they’re so great. Sure, the Browns lose almost every Sunday. Sure, there is sometimes a sense of hopelessness over whether the team will ever step up their game. But the fans still tune in each week to watch them.

And it pays off. This season, the Browns fans were in for a real treat when not only did the team win three weeks in a row, but also found themselves with a better record than the Pittsburgh Steelers, and tied with the Ravens.

Suddenly, all those disappointing Sundays didn’t mean much anymore. It was all about the amazing runs by Travis Benjamin or the outstanding throws from Brian Hoyer.

The victories were made so much better by the fact that we as fans had to wait so long for them.

The Browns may still not have a chance of getting to the playoffs, and they sure as heck aren’t making it to the Super Bowl anytime soon, but the fans will continue to watch every Sunday in hopes that the Browns will win, and share in the glory of said win as if it were our own.

The fans deserve it just as much as the team does, anyway.