The Muslim Student Association revamped their student organization and held their very first event in the Union on Monday.

Many students may not have known that the MSA existed due to an entire year of inactivity. Two students have since reestablished it. When asked about the MSA and the event being held on Monday, Israa Iddeb, the president and co-founder of the new MSA, said,  “We are trying to gather Muslims and non-Muslims alike to learn about Islam and the ways of it.”

Most of the meetings usually focus upon education. Amal Almahd, a junior in engineering and the vice president of the MSA, said, “We usually watch an educational video and discuss it afterwards.”

Amal also said that she was uneasy before the first meeting of the semester, but luckily they had a great turnout of both Muslims and non-Muslims in attendance.

“It’s interesting to hear about others’ views,” Amal said. The event was one of the first topics of their agenda.

Although several other activities were available to participate in, the event’s main goal was to educate people on the religion of Islam. At one of the tables people were free to pick up an English translation of the Quran, the Muslim holy book, and to take it home.

Visitors who were intrigued enough to venture toward the event had the chance to eat some rare sweets. Baklava, an ethnic dessert, was a crowd favorite. Coffee was also offered for the less adventurous.

Similar trivia on the given material were written on the posters as a part of the event that students could test themselves on.

Several colorful posters with intriguing information were on display in the Student Union across from Starbucks. Among them were posters that named and described the five pillars of Islam as well as a poster explaining prayer. 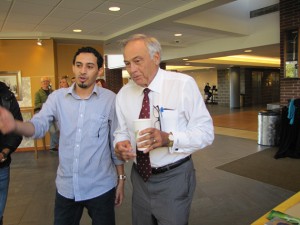 One activity that a passerby could participate in was the coloring of a picture. The plan was to give the drawings to the children on the day of the festival at the local mosque, or masjid. Muslims hold the festival, Eid, twice a year.

People could even dress themselves in traditional Muslim clothing and take pictures.

The MSA is planning to host several other events this semester. Club meetings are held every Friday at 4:30 p.m. in the Student Union.