When Mary Myers was in fifth grade, her teacher at the Catholic school she attended kept a bowl of candy on her desk. When students received a good grade on a test or behaved well in class they would receive a piece of candy.

Myers said that when the teacher left the room, kids would go up to the desk and steal a piece of candy. 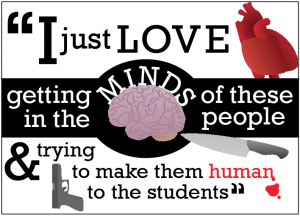 “I thought that was wrong,” Myers said. “She only has a limited income, and they shouldn’t steal the candy.”

Myers then talked to her mom and went to buy some of the wax bottle candies with liquid inside. They use a syringe to suck the liquid out and replace it with colored vinegar water.

They then took the candy to the teacher, explained what the students were doing while she was gone, and replaced the candy on the desk with the wax bottles. The next day, students stole the candy and were disgusted by the liquid inside.

“I found out years later that they were crying to her saying, ‘I’m so sorry, I’m so sorry,’ and they never stole again,” she said.

This is one of the many instances in life that were motivated by Myers wanting to do the right thing, leading to her extensive career in criminal justice and eventually to teaching a popular class at The University of Akron titled “Profiling Serial Killers.”

The class is taught every fall semester by Myers and focuses on getting into the mind of killers to find out why they do the things they do and how people can prevent these situations from happening. Myers incorporates situations from her experience in criminal justice with the Akron Police Department to give students real-life examples.

However, working in criminal justice was not her original plan. She began her college career studying languages (including Spanish, French, Italian, Latin and American Sign Language) as an undergraduate student at The University of Akron. She received two bachelor’s degrees – one from the College of Education and one from the College of Arts and Sciences – in four and a half years, graduating in 1975.

After teaching Spanish and French for a year, Myers was recruited by the Akron Police Department. Myers said one course she took here called “Self-defense for Women” was what got her into her field of work.

The class was taught by two police officers and they recruited her to the department.

“So I became a police officer,” she said. “Eventually, I became a detective, then a supervisor, then a sergeant, then a lieutenant and a captain.”

Myers said that as a lieutenant, she was sent to the FBI National Police Academy, a 12-week program with police officers from all over the world. She said that this is where she took a three-hour graduate-level course on serial profiling. Throughout her work, Myers also gained knowledge through various investigations with the police department as a detective.

After being with the department for 10 years, Myers said her personality changed. She didn’t like people anymore.

She went back to school at Kent State University to find out why it changed, receiving her master’s degree in school counseling and PhD in counseling and human development. She also received her licenses as a social worker, counselor and psychologist.

“With my police background, my psychology background, and with my multicultural diversity background, I’m in pretty good shape to be analyzing serial crimes,” Myers said.

While at the police department, Myers was involved with the SWAT Team, was a hostage negotiator for 14 years, ran the homicide squad for a year, ran the vice squad for three years, and was a supervisor in the 911 communications room for two years.

Because of her work with the police and her degree in education, Myers was asked to start teaching part-time at UA in 1980, then full-time when she retired from the police department in 2001.

Along with “Profiling Serial Killers” class, Myers teaches “Interviews, Interrogations and Hostage Negotiations,” which is offered in the spring, and teaches students how to tell if someone is lying, through studying their behaviors and facial micro-expressions. She also teaches “Basic Forensic Methods,” and “Introduction to Criminal Justice,” among many others.

Her favorite class, though, remains “Profiling Serial Killers.” While the students do learn about the history of serial criminals, the class is designed to help the students learn more about the criminals’ minds and to help them recognize those signs throughout their everyday life.

“I just love getting in the minds of these people, and trying to make them human to the students so they can see who they’re dating, and to make sure they don’t end up dating a sociopath,” Myers said. “I don’t want my students to be the victim of a serial killer, so how do you recognize it ahead of time?”

In the most recent class, Myers discussed school shootings with her students, starting the class by asking students what traits school shooters have.

Students listed a variety of traits, including people who have been bullied or have had a rough home life. Myers then asked the students who had experienced this in their own life, and many raised their hands.

“So what stopped you from becoming a shooter?” she asked.

From there, Myers discussed with students how people are shown how to kill people through the news media, movies like “Saw,” and TV shows like “1000 Ways to Die.” They also discussed ways people are tracked, such as through purchases and online searches.

Myers took out her keys as an example and pointed out her rewards cards on the chain. She said through these cards, businesses are able to track eating habits, safety habits and more. Police and other officials use this kind of tracking and others similar to keep track of potential serial
criminals.

“Can we track a serial killer from the rope that they buy at a grocery store or hardware store?” she said.

Myers said that while there are some criminal justice students in the class, many students come from a variety of  backgrounds and majors.

“Word spreads through the students, but it’s also on television,” Myers said.

Myers said she has made more than 50 news appearances in the past two years, including News Channel 5 and CNN to discuss a variety of cases, including the case of Ariel Castro, the Cleveland man who held three women captive in his home.

When asked, many students said that they took the class because it sounded interesting.

For Myers, what she is teaching is more than just an interesting topic. Though she has never killed anybody, she said she has been faced with multiple cases where she had to come to the conclusion to kill a criminal if necessary.

“That put me right in the right place to teach ‘Profiling Serial Killers’ because I crossed that boundary,” she said. “[For] people who have less inhibition than I have — and I have a lot of inhibition — how do we stop them from becoming serial killers?”