Clubbing is not worth the cash

A crowded dance floor filled with swaying bodies and blaring music. The drinks are flowing and people are partying the night away and hooking up with strangers.

Scantily clad girls are all gathered with their groups of friends dancing, taking pictures and chatting up guys. Guys are hanging with their friends while dancing, drinking and hitting on girls. 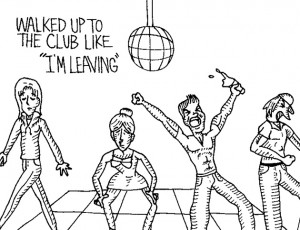 Drunk girls sway on their heels as they attempt to dance. Some of them are getting grabbed by shady guys, others are throwing up in the bathroom while their friends hold their hair.

Drunk guys are grabbing random girls and walking around with half-empty bottles of alcohol. Some of them even try to get into random fights as they night wears on.

This sort of atmosphere seems like something out of a reality show like “Jersey Shore,” but is actually quite commonly found. In fact, this type of atmosphere I entered into only a few short weeks ago, and what an adventure it was.

For me, as a first time club-goer, the experience left a lot to be desired. The club was trashy, with no dress code being enforced.

The music was bad, the air was smoky and personal space was at a minimum.  It was hardly a fun or exciting night.

The club wasn’t in a nice building or area; in fact, there were four cop cars stationed outside of it the whole entire night. The line wasn’t long, but the entire time smokers were puffing away, making it difficult to avoid the fumes.

The bouncers by the door were creepy and annoying, blocking the door and hassling girls to meet up with them later.

The Facebook pictures must be strategically taken each weekend so that the club looks a million times nicer than it actually is. While the club wasn’t dirty, it was old and outdated.

Though no smoking was allowed inside the club, the pungent odor of cigarette smoke still hung in the air.

Fish bowls filled with alcohol seemed to be everywhere, each one filled with an outrageous amount of straws so everyone could share. It’s hard to imagine a more disgusting way to enjoy a drink, but to each his own.

The music the DJ was playing was less than appealing. A majority of the songs were by Rihanna and the rest literally repeated one word the entire time.

Guys who apparently didn’t know the meaning of personal space (or were too drunk to understand) were all too eager to get up in your face, touch you and bother you.

There seemed to be an enormous amount of creepers all too willing to touch you and attempt to rudely coax you out onto the crowded dance floor.

The dance floor itself was crammed with so many people it was basically impossible to get to. That is, unless you wanted to be lost in a hot and sweaty sea of people.

Nothing sounded less appealing than being “grinded” on by a bunch of creepers.

The girls in the club were interesting. The outfits seemed to vary from short skirts and bras to tight pleather leggings and crop tops. While some of the girls could pull these looks off, a majority of them should’ve chosen more conservative outfits for the night.

There’s nothing appealing about squeezing your body into a skin-tight outfit and struggling to walk around in six-inch heels all night. If anything, the loss of blood flow and aching feet aren’t worth any amount of attention.

Needless to say, after two hours inside the club, it was time to go home.  It takes a certain type of person or large amounts of drinks to enjoy this type of club. There’s nothing but chaos surrounding you the entire night.

There’s no room to dance or breathe and there’s a constant flow of creepy guys grabbing you and bothering you. There seems to be an endless amount of fights just waiting to break out.

The amount of drunken people flailing around the club when they should be taking a cab ride home is insane. While for some this might sound like an awesome party, for others it’s just a mess.

The admission prices alone aren’t worth it. By the time club-goers pay for parking, admission and overpriced drinks they’ve spent a huge chunk of money in one night.

That money alone could be saved up for a more exciting adventure or several nights out with your friends to the movies, dinner or even bowling.

Perhaps a classier club would have made it a better experience. If it had been in a nicer area with better music, a dress code, a bigger dance floor and a nicer interior, maybe it would’ve been fun.

Maybe if I had been in a bigger group the experience would’ve been more worthwhile.  But even then, the bulk of club culture still exists.

What it really comes down to is an individual’s personality and their definition of fun. If what has been described seems like fun, then go crazy this Saturday.

If it seems like hell on earth, then stay home or go do something different and avoid the clubs altogether.