Zips soccer proves to be contender over last week

The No. 18 ranked Akron Zips soccer team had a busy week last week, as they hosted No. 17 Michigan State on Wednesday and Northern Illinois in Mid-American Conference play on Saturday.

Both games forced Akron to have a tough mentality, as the Zips continued their search for a MAC tournament and an NCAA tournament berth.

In the first match last week, the Zips (11-3-1) took on the Michigan State Spartans (8-2-3). The Zips and Spartans would end in a scoreless tie through two overtime periods. 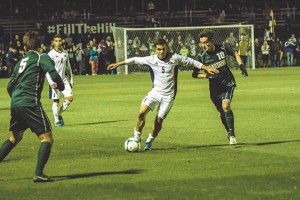 The Zips came out strong in the first half, as their offense had outshot the Spartans by a margin of 11-2. The Spartans gave the Zips a scare when a header nearly bounced over goalkeeper Fernando Piña. Piña saved the goal with his forearm, then chased after the ball and knocked it away again. It was one of the highlights of the game.

Akron controlled possession for the majority of the first half, and looked as if they were going to score right before the end of the half. However, Saad Abdul-Salaam’s shot was saved by the Spartans’ goalie, Zach Bennett.

The Zips looked keen to score in the first half, and it did not stop in the second half either. The Zips dominated the Spartans again in the second half, with a 13-3 shooting advantage. Adam Najem, for Akron, would hit a liner off the crossbar late in the second half from the top of the box, which would have provided Akron the win.

In the two overtime periods, Akron would once again outshoot Michigan State 6-1. The Spartans defense was able to continually stop the Zips from dominating offense, which led to the tie.

The Zips fought hard for their 2-1 win over NIU Saturday, as they close in on their ninth consecutive MAC championship. The Zips clinched a berth to the MAC tournament and can secure the MAC title with a win Nov. 9 against Western Michigan. 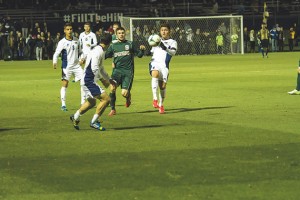 The Zips dominated the scoring sheet, posting a shooting advantage of 18-4 and dominated in corner kicks with an 11-2 advantage as well.

The Zips would strike first. In the 12th minute, Derschang’s cross to Salaam would be redirected to Najem where his shot flew into the right post, giving Najem his fourth goal in his last five matches.

NIU would strike back quickly. In the 15th minute, the Huskies’ Isaac Kannah ran through the Zips’ defense, sneaking the ball past Piña and tying the game one to one. Akron immediately went on the offensive, nearly scoring in the mere minutes after NIU tied the game at one. Najem would give Matt Foldesy a beautiful ball, but it would just miss — hitting the left post.

In the second half, the Zips remained dominant with possession, which ultimately led to the Huskies’ defeat. As the game was nearing the final 10 minutes of regulation, again Najem provided a quick cross to the right of the field, where Derschang would get the ball. Derschang took one quick touch before sending a lightning shot through the left post. It earned Derschang his first goal of the season and secured Akron’s 2-1 victory.

The Akron Zips were ultimately successful last week, as they secured a MAC tournament berth with a win over Northern Illinois. The Zips also secured a physically tough tie against ranked Michigan State, showing that they clearly have what it takes to compete with the top teams in the nation. Even though the Zips came out of Wednesday’s game with a tie, they clearly dominated the game in possession, shots and physicality.

The Zips will head up north to Ann Arbor to face Michigan on Wednesday. Akron and Michigan have been constant foes for the last several years.

Last season, Akron beat Michigan University in the round of 32 in the  NCAA tournament.