EJ Thomas Hall transformed for a night of Halloween fun at The University of Akron’s Boo at the Roo Thursday night. Students got into the Halloween spirit and brought out their creativity while participating in the annual Halloween costume contest.

Students danced past judges to music provided by DJ Sparky B., VJ Impulse and Craze, while they enjoyed pizza, candy, soda and free prizes. 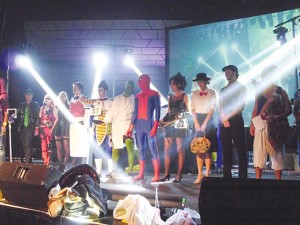 “This is my third year coming to Boo at the Roo to try and win the costume contest,” alumna Eryn Stark said.

Students had the opportunity to go talk for a couple of minutes with the judges before gathering in a line to parade their creativity before them. Sparky B. said this was a way to better show off the participants’ costumes.

“Its like being stuck in a hurricane in there,” first-year student Danny Cage said. “I’m having fun.”

The “Best Costume” award was given to brothers Steve and Matthew Woods. The prize for winning “Best Costume” was two round-trip U.S. airline tickets to vacation over spring break. The brothers dressed as Minions from the movie “Despicable Me,” who are normally small, yellow, cylindrical creatures that have one or two eyes.

Janean Kazimir, a third-year biology major, dressed as a fortune teller and won “Most Original Costume,” receiving a $100 Best Buy gift card. Kazimir’s costume involved her being encased in a wooden box with her crystal ball in front of her. Kazimir scouted quite easily around the dance floor to show off the originality in her costume. 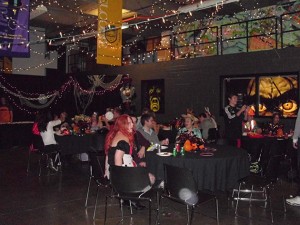 The “People’s Choice Costume” winners were chosen by how loud the people yelled for the contestants, and the prize went to Julia Edwards and Kyle Lorek, dressed as Mary Poppins and Bert. The winners received not only the people’s choice but also a $100 Best Buy gift card for their winnings.

After the judging, students continued to dance and rush to the photo booth for free photos, taken by Nick Jensen. 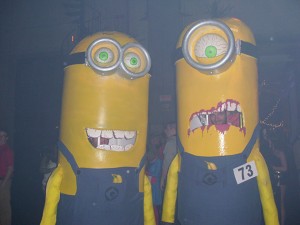 “Students are able to get their pictures taken in a series and then print and post them to Facebook, email or whatever,” said Jensen.

For more information about other upcoming events at EJ Thomas Hall, visit uaevents.com. Tickets for any event at EJ Thomas are available at the EJ Thomas ticket office or online at ejthomashall.com.