Oct. 31 marks a day of freedom, a time where one can choose to be whatever he or she desires without the overbearing judgment of peers, without the whispers of, “Why are they wearing that?” and without the possible loss of social reputation. To be more distinct, this day of freedom is better known as Halloween. 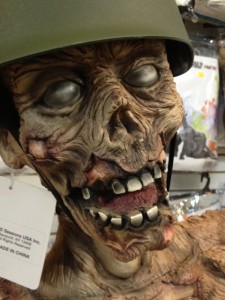 Halloween grants one the opportunity to explore the realm of being someone, (or something, for that matter) different and/or unique for a day. Whether someone is aiming for horror attire equipped with artificial blood and rotting limbs, or for a rather revealing novelty outfit, any style of dress is welcome within the community of active Halloween participants.

“Halloween is a chance to break out of your comfort zone and dress up,” said University of Akron student Julie Polsinelli.

Polsinelli, deciding to go for a more divergent form of costume for this year, dressed as the TARDIS from the hit BBC show “Doctor Who.” Dying her hair blue and wearing a Hot Topic dress with an image of the TARDIS on the front, Polsinelli chose to steer away from the ordinary and “go all out this year.”

Jessica Johnson, a recent graduate from The University of Akron, currently works at Spirit Halloween and is surrounded by this season’s most popular Halloween apparel and accessories.

“I think there are a few [costumes] that are pretty popular this year,” said Johnson. “Duck Dynasty is big and Miley Cyrus’ outfit from the MTV VMAs was popular as well. We sold out of that in just one day.”

Johnson stated that “Despicable Me” and “Adventure Time” were also popular selections among both children and adults.

“There are a few themes that are always popular throughout the years, too,” said Johnson. “Those are the police outfits, military outfits and super heroes.”

Johnson says that her favorite part about working for Spirit Halloween is enjoying the little scares that people get when they walk throughout the store. 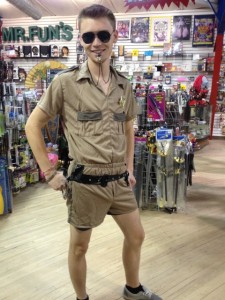 “We have a lot of exclusive animatronic displays in our store that jump and surprise the customers. Most of them jump or scream then they laugh, which makes me laugh,” Johnson said.

Alongside Spirit Halloween, Mr. Fun’s Costumes and Magic Emporium has been providing popular and sought after costumes since 1968.

“Halloween is an opportunity for people to step out of the box and be something that they can’t necessarily be at other times. It is a chance to play,” former owner Al Pocock said.

A part of the National Costumers Association, Mr. Fun’s has continued to grow as a business and gain further popularity with each passing Halloween.

“I love helping people pick out costumes. This is the time to be anything you want to be,” current owner Meralie Pocock said. “My favorite costume is the Queen of Mardi Gras. The dress is iridescent and changes color in the light. It was actually the first costume I wore with my husband, and it won an award for its design.”

Pocock stated that the lead trends this year tended to stray away from the gory side, even though there “are some really elaborate zombies this Halloween.”

With employees dressed in Halloween costumes such as Daphne from “Scooby Doo,” Lieutenant Dangle from “Reno 911,” Anakin Skywalker from “Star Wars” and a little cross-dressing with the male employees, Mr. Fun’s hosted a friendly and lovable atmosphere for all ages, and even species. Dog and cat costumes were available along with the wide variety of costumes, masks, wigs, makeup and other accessories.

“Scaring children is my favorite part about Halloween,” employee and recent UA graduate Marcello Romeo said. “Definitely come visit Mr. Fun’s. There is a lot in stock for the season. We can make you completely disappear.” 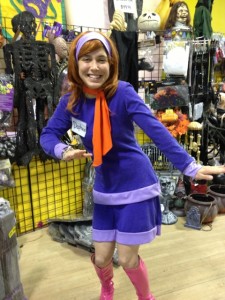 Though favored stores such as Spirit Halloween and Mr. Fun’s Costumes and Magic Emporium provide Halloween participants instant access to a new identity for a day, some choose to take Polsinelli’s route with a costume and lean on the creative side for this Halloween season.

“I dressed up as an artist for this year,” UA student Daniel Hermann said. “I ended up creating my own costume. My original plan was to dress up as a Thor look-a-like, but I decided to go for an artist instead.”

Describing himself as “a hot mess,” Hermann captured the look of an artist by straightening his hair, adding an artsy beret to the side and covering his face with paint.

Even though Halloween is a time to take on a new form, some choose to skip the dressing up aspect and enjoy those around them who do transform themselves for a day.

Sam Fabynick, a University of Akron student, did not dress up this year, but still chose to celebrate the Halloween season by attending a Halloween costume contest at EJ Thomas.

“I saw these people who made these zombie costumes, except they were also minions [from “Despicable Me”]. I thought it was really cool,” said Fabynick.

If one is planning on an extensively decorated costume or a costume on a simpler spectrum, Halloween encourages it all. The opportunity to set the usual norms aside and place the obscure, and maybe even crazy, in front is difficult to pass up. As Halloween lovers continue to say, this season is a time to be something new and different.