Lungs burning, John Doe tore into the abandoned corner office and slammed the door behind him, collapsing breathlessly against the sturdy oak frame.

Doe collected himself. He felt exhausted but he forced himself to calm down and concentrate. The thick door would buy some time. The room was mostly empty besides a bare desk and high-backed chair.

This office had big windows all around and John could see smoke rising all over the city. The sound of sirens was unmistakable, rising above the cacophony of gunfire in the streets below. It smelled like death. 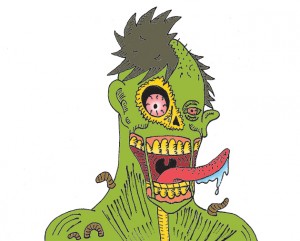 A sudden, whacking thud drew John out of his stupor and his attention was focused again on his wooden protector, shuddering on its hinges.

With shaking, sweating hands, John chambered one of his last three shells and pointed the shotgun at the door. He clenched his teeth.

Then he heard something.

John looked out the window to his right and there was Dillon, hovering outside. John smiled. He shot out the glass pane and grabbed his compatriot’s outstretched hand, the heavy oak door crumbling as the jetpack carried them to safety …

Half of these guys profess to have “plans,” 99 percent of which are pants-on-the-head-retarded. If you’re reading that story above and thinking, “Um, jetpacks aren’t real,” you need to reevaluate your critical thinking skills. Zombies aren’t real and neither are your chances at surviving any “apocalypse.”

Despite their abundance, there is nothing wrong with zombies in media, at least not in my opinion. I love “World War Z” (the book) and “The Walking Dead.” It’s an interesting idea: being forced into preserving your own life and the lives of your loved ones while the world destroys itself around you.

I just wonder why people find this scenario so appealing. How bad could your life possibly be that you would hope for this to happen?

A lot of people see themselves doing very well in an outbreak. They imagine themselves in John’s position, pointing a near-empty firearm at a horde of incoming brain-eaters, preparing for death, when they’re suddenly rescued and taken to safety.

Let’s be realistic: you’re more likely to be the zombie, battering your face into the other side of the door.

Now, I’m not going to talk about the likelihood of a zombie event (0 percent possibility), but I do want to talk about what an “outbreak” would mean and why you’re stupid for wanting one. Any movie, TV show or book that talks about a zombie apocalypse involves 99 percent of everyone dying.

Now, I’m not telling you what to think, but keep in it in mind that when someone says they wish this would happen, their fantasy includes your death. It includes their friends’ and families’ deaths. Pretty much everyone you’ve ever known is going to die in any kind of “apocalypse.”

You’d have to be a lunatic to want this, right?

Nope. Perfectly sane people talk about this, and lots of young guys actually have plans for when this “inevitably” happens.

I don’t want to get into all that, but I do want to talk about my favorite “outbreak contingency plan” that this guy (who I’m going to call Jim) in my speech class came up with. He put some legitimate effort into this thing.

Jim was going to go to Canada. Apparently, zombies don’t function well in very cold climates. There was something about not being able to maintain muscular function, meaning the cold would quickly render them inoperable.

He had mapped out this route which avoided major traffic arteries. He had scheduled stops and a list of possible alternatives along his way.

He knew how much food he would need and how many provisions would be required for another person to join him. Jim even knew which type of car would be best for the trip and the climate. Everything was set. It was amazing.

Most plans involve, and I quote, “being a badass” until the army shows up or the zombies simply rot away. And I love the plans that involve turning regular things into weapons of mass destruction.

If you think that fashioning a motorcycle and a bulldozer scoop together and riding it through a horde of the undead is a decent plan, you’re an idiot. A very creative idiot.

Come on, be honest with yourself. Even the good plans would fall apart. Even Jim’s plan would probably get him killed, and he got a group of students to do a project on it. Zombies are cool, hypothetically.

There’s no way you can sit down, look at all it would entail, and think “Yep, this right here sounds like a good time. This is what I want to happen.”