The University of Akron basketball teams have a lot to look forward to in the 2013-2014 season.

The Zips men’s and women’s teams hosted their first exhibition games Friday and Saturday last weekend, and both shined. The men’s team defeated Bluffton 95-40 while the women’s team took care of Lake Erie 97-48. 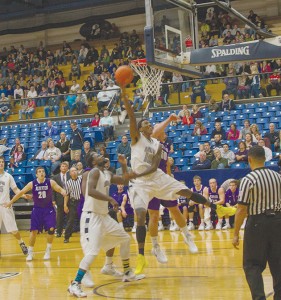 In the game against Bluffton, Akron started slowly. It was not until almost eight minutes into the game that UA was able to extend their lead to five points. However, after the Zips started winning momentum, their foes did not have much of a chance.

The men’s team shot 51 percent in the first half, but only made 25 percent of their three-pointers.

Sophomore Carmelo Betancourt started the game as point guard, but junior college transfer Nyles Evans received plenty of playing time too. There have been many questions surrounding the position, and the debate as to who should start will continue until one of the players claims the job.

The Zips finished the first half with a 45-21 lead, and they did not let up in the second half. Senior Nick Harney was the Zips’ leading scorer. Harney was able to drive to the rim the entire game. Bluffton did not have the ability to stop him.

Another thing that was on display in the men’s game was the depth that the Akron roster has. The Zips played 13 players Friday night, and each played at least nine minutes on the court — most players played much longer.

The Zips’ depth has been a strength for several years now; it helps them wear down their opponents and overcome them in the second half. Their depth again will play a large part of the season, as head coach Keith Dambrot appears to be attempting to implement a style of Havoc defense.

Havoc defense was made popular by Virginia Commonwealth University and contains a lot of pressing. It is an intense defense that can tire out players quickly, so the extra players will come in handy. 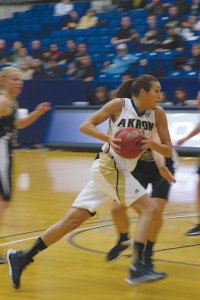 In the women’s game, it was obvious that senior Hanna Luburgh is going to have a big season. It has been argued that Luburgh is the most talented player that the Zips have, and though her teammate Rachel Tecca won Mid-American Conference Player of the Year last season, Luburgh led her team in points again Saturday. Luburgh scored 22 points; Tecca finished with 20. They both are going to help their team finish first again in the MAC East Division.

Freshman Hannah Plybon started for Akron. She played 25 minutes and scored 14 points. She was the leading scorer in Ohio last season while in high school and could have a great career at Akron if she continues to improve.

The Zips were able to quickly dismiss Lake Erie. At halftime the score was 41-19. The Zips shot at a 51 percent clip throughout the game.