EJ Thomas Hall was the place to be Friday evening when more than 1,400 members of the university and community gathered together to celebrate its 40th

The grand event billed as “40 and Fabulous!” featured a concert starring Northeast Ohio native Michael Cavanaugh, who starred on Broadway as the pianist and vocalist for Billy Joel’s mega-hit “Movin’ Out!”

According to his website michaelcavanaugh.com, Cavanaugh, 41, was handpicked by Billy Joel to star in the title role and evokes a style rivaling the Piano Man. He appeared in the show for three years and stared in over 1,200 performances.

According to his website, in January 1999, Michael received an offer that would change his life, with an opportunity to play in Las Vegas at the famed New York-New York Hotel & Casino. It was there that Billy Joel spotted him and joined him on stage. 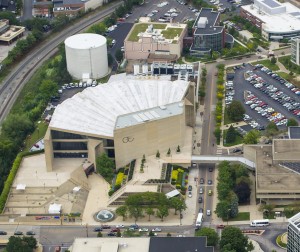 It only took two songs before Billy was convinced that he had found his new Piano Man.

And Friday evening the audience at EJ Thomas Hall seemed captivated with him as well. The energy in the room was contagious, and he received multiple standing ovations.

Along with the Akron Symphony, Cavanaugh took the audience on a stroll down memory lane by playing hit songs by Elton John, Billy Joel, The Who, Bruce Springsteen, James Taylor and Paul Simon.

President of the Greater Akron Musical Association (GAMA) Board of Trustees Renee Pipitone recalled a memory about her father, Ray Sandefur, the founding dean of the College of Fine and Applied Arts, coming home from work at the university for weeks and speaking with such excitement about the “possibility of such a hall.”

“A hall that would link the university and its citizens that would be a dramatically different and dynamic venue for all the arts of the campus and the region,” Pipitone said.

Pipitone said she remembered opening night. Her parents, dressed in their finest, heard the Akron Symphony Orchestra play in EJ for the first time.

“EJ Thomas Hall has continued to be the preferred performance venue for all of EJ’s 40 years,” Pipitone said. “Which is 300 performances to my calculations.”

Pipitone said that each time she enters the performance hall with her husband, Guy, she is reminded of the time when it was just a dream.

“The magnificent silver cylinders that hang in the lobby and mysteriously raise and lower the ceiling and the astonishing fact that 2,955 people could be seated there,” Pipitone said. “Many people made EJ happen and EJ became the place where smiles, tears, laughter, reflection, excitement and applause happen … lots and lots of applause.”

Howard Parr, the executive director of the Akron Civic Theatre, said that a lot of people believe that a rivalry exists between the two theaters.

“That couldn’t be further than the truth,” Parr said. “We are 84 years old and like to think of ourselves as the older sister sort of watching our younger sister make her mistakes.”

Parr also credited the university for its partnership with a $20 million restoration and expansion project to the Civic Theatre’s failing 70-year-old infrastructure.

In the summer of 2001, the theater closed its doors for one of the most comprehensive restoration and expansion projects in its history.

Barbara Feld recently retired over the summer from her position as executive director of Tuesday Musical after 25 years.

She will take over as board president of the Akron Area Arts Alliance in
January.

“Tonight is EJ’s night and what I really admire about EJ is its commitment to collaboration,” Feld said.

Event chairs Mary Ann Jackson and Dan Dahl worked together to create “Once in 125 Years Event” to honor Tuesday Musical’s proud history and set the stage for its future at EJ Thomas Hall.

“This building is a true treasure in Akron,” Feld said. “It’s an event space, it’s a performance space, and it’s a high school auditorium space. It’s a place where we can all come together and be entertained, educated, engaged and informed. All of us are blessed to call Akron home, but we are also blessed to have this performing arts venue.”

After the concert, the entire audience was invited to an anniversary party in the lobbies featuring champagne toasts and cupcakes.

“I was thrilled,” Dahl said. “The event was a resounding success, from the performance with symphony and Michael Cavanaugh, people just seemed to have so much fun and were so supportive.”