This weekend, the volleyball team at The University of Akron won their first and second Mid-American Conference matches of the season against the University at Buffalo and Ball State University.

The Zips (8-17, 2-12 MAC) started their victorious weekend by hosting Buffalo (16-10, 4-9 MAC) and winning 3-2 in a five-set stunner on Thursday. Each set was a close call, with the highest margin of victory being five points. The Zips also took the last two sets after being down 2-1. They pulled through by two points in the final two sets to win the match.

This victory snapped a 13-match losing streak that stretched back to the game against Youngstown State on Sept. 21. The Zips had 56 kills, seven serving aces, 65 digs and eight blocks. The Bulls had 69 kills, four serving aces and 14 blocks.

Alex Cocklin had the highest number of kills on the team with 18, while Kelsey Wilson added a career-high 16 kills. Ashley Holder also had a career-high and kept the offense on their feet with 47 assists. Lastly, Jill Paluch and Callie Mack helped the defense with 24 and 11 digs respectively throughout the match. 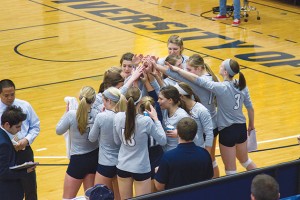 This was a monumental victory for the Zips because this victory was the first against Ball State in exactly five years.

Both teams played an even game and tied in blocks and serving aces, with nine and five respectively. The Cardinals would lead in digs and kills by recording 80 and 54 respectively, while the Zips had 65 digs and 51 kills.

For the game, Cocklin tied her high of 18 kills with Ashley Holder, posting 40 assists and 17 digs, which led to great position for the Akron
attackers.

Julie Shallman also helped the Zips’ offense with nine kills and on defense. Shallman delivered three solo blocks and two assisted blocks on the Cardinals’ offense. The Zips had help from Paluch who led from the back and had a high of 20 digs.

Ball State had two players who each recorded a double-double in the match: Alex Fuelling (15 kills, 14 digs) and Jacqui Seidel (20 assists, 11 digs). Catie Fredrich had a high of 24 digs, while Mindy Marx had five blocks during the game.

The Zips will finish their season at home as the  host Bowling Green University on Friday, Nov. 15 and then Miami (Ohio) University on Saturday, Nov. 16 for the end of the regular season. The Zips have been elminated from Mid-American Conference tournament contention.