Looking back at the 2012 presidential election, the State of the Parties conference presented its attendees with answers to questions such as, “What was the role of political parties during the elections?” and “What are possible outcomes for the political parties involved with the 2012

The State of the Parties conference was held last Thursday and Friday at The University of Akron’s Quaker Square. 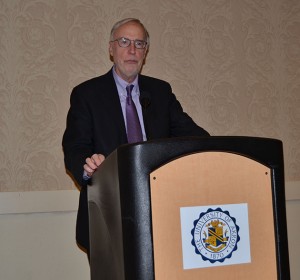 Addressing topics such as national party polarization, party nominations and tea party activism, participants were offered a wide selection of panels to attend with the addition of lunch, dinner and keynote speaker Dan Balz, author of the book “Collision 2012.”

“This is a well-respected event for political science,” said Steven Brooks, the associate director of the Bliss Institute.

Brooks said that the scholars invited to the conference were required to submit a political research paper to participate in the panels.

“This [research] will be relevant to figuring out what will happen in the future. That is what I am looking forward to, is seeing why these [political issues] are happening,” said Brooks.

“There is so much incredible talent here. I like to get some of the scholars’ perspectives because each perspective adds to something,” Linda Feldmann, panel moderator and journalist of The Christian Science Monitor, said.

Feldmann said that because of her line of work, she deals with a lot of day-to-day issues of politics. 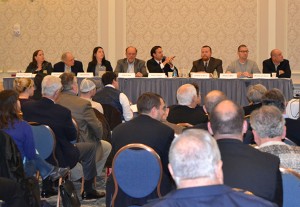 Papers with titles such as, “Why American Political Parties Can’t Get Beyond The Left-Right Divide” and “Partisan Nation: The Rise of Effective Partisan Polarization in the American Electorate” were some of the more popular paper topics among audience members.

Feldmann’s panel in particular was covered by C-SPAN and audience members were given the opportunity to interact with the scholars after their presentation while C-SPAN recorded.

“It is easy to go off of anecdote,” Feldmann said. “[With this conference], a more scientific view is provided. I appreciate seeing the larger trends in politics.”

Throughout the panels, a range from four to eight scholars presented basic overviews of their submitted papers, and then questions were taken from audience members.

“[The State of the Parties] is a chance to get together and discuss recent debate topics,” Brooks said. “Political science faculty and students will be able to see prominent scholars speak about today’s issues.”

For more information about the Bliss Institute, visit uakron.edu/bliss.