Terry Gould, a Navy veteran and University of Akron alumnus, came to EJ Thomas Hall’s Stage Door Monday night in honor of Veteran’s Day and to speak about his book, “How Can You Mend This Purple Heart?”

Gould served in the Navy from 1968 to 1971, according to uakron.edu. He went on to receive his B.A. in technical education at UA and then his M.B.A. from Baldwin-Wallace University. He then went on to a 25-year business career. 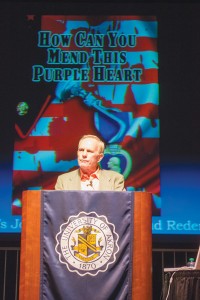 The story of his time spent in the Navy had kept him from healing all those years after he served, he said. This is the story he recounts in his book.

Gould said the story takes place during the height of the Vietnam War, when he spent 15 months recovering in Philidelphia Navy Hospital with a group of Marines from wounds caused by a drunken car accident.

“‘How Can You Mend This Purple Heart?’ is not a story of combat,” he said. “It is a story about boys who returned from combat as men. Young men who left a better part of their youth, a bit of their souls and a lot of their flesh in Vietnam.”

He continued by saying that the story is about how these men tried to recapture their youth while at this hospital that soon became their home.

“It served as a place to gather, to belong, to support, to struggle and ultimately a place to heal,” he said.

Gould said that the story he told in his book is one he carried for more than 30 years and blends together the bits he remembers, what he created, and the people and places that made this story so powerful. He went on by telling how he ended up in the hospital, describing the men he got to know so well, and sharing excerpts from the book with the audience.

Gould said that the proceeds from the sale of this book will be split between The Ohio Veterans’ Memorial Park in Clinton and Purple Heart Homes.

According to the website, Purple Heart Homes was founded in 2008 by Dale Beatty and John Gallina, who were both wounded while serving in the National Guard in Iraq in 2004. The website says the organization is “dedicated to providing personalized housing solutions for Service Connected Disabled Veterans and their families that are substantial in function, design and quality — homes that are fit to welcome home, and thank, the fighting men and women of America.”

Since Gould self-published the book in 2009, it has received a Silver Medal Award from the Military Writers Society of America and James Webb Award from The Marine Corps Heritage Foundation.

Gould said that he tried not to think about his time at the hospital for 30 years, not because he wanted to forget, but because he didn’t want to remember.

“The memories kept percolating into my thoughts, finding their way into my conversations,” he said.

With advice from close friends and family, he finally decided to write his book. He said his wife’s encouragement and understanding is what ultimately pushed him to write his story, which he said has helped him heal.

“They say that time heals all wounds,” he said. “I say to that, time heals the physical wounds, but the emotional and mental wounds may never heal.”

He said that the decisions he made led him to bear witness to the sacrifice and struggles made by those wounded in combat and all others in the service.

“I am not a hero,” he said, “but it has been my privilege and my honor to serve among them.”

The event was sponsored by UA Adult Focus, EJ Thomas Performing Arts Hall, and the ROTC at UA.