Sigma Nu and Tau Kappa Epsilon raised money for St. Jude Children’s Research Hospital. And then the men from Sigma Nu had their heads shaved.

The funds were raised for  the “Bald is Beautiful” event last Tuesday night at Up ‘til Dawn’s FUNdathon. 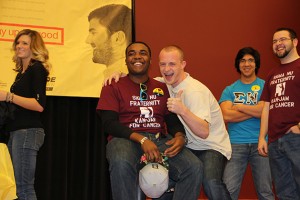 Alison Doehring, the coordinator of civic engagement, said the fraternities raised over $400 for St. Jude.

For the event, the fraternity that raised the least amount of money had to have their heads shaved. Tau Kappa Epsilon raised $273.06 and Sigma Nu raised $173.26.

Doehring said Up ‘til Dawn is a registered student organization on campus and is a partner with the hospital. She said that since the group began in 2006, it has raised more than $24,000 for the hospital.

Between FUNdathon and the recent Bachelor Auction, Up til’ Dawn has raised more than $860.

Students at the event were given the chance to form their own fundraising teams, and were able to enjoy free food, prizes and simulated tours of the
hospital.