I realize going into this article that I am going to be a tad biased because I, in fact, work in the holiday joy-obliterating world of retail.

Thanksgiving, much like other holidays, has been officially commercialized. Watching TV, reading magazines and generally existing makes the impending Friday following Thanksgiving seem like the only point to having the holiday at all. 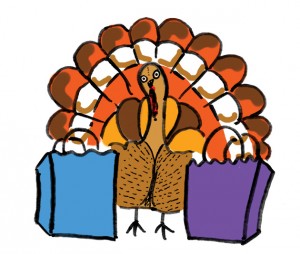 Now, I realize that originally Thanksgiving was about Europeans essentially murdering the native peoples of our country so that they could take the resources for themselves. But much like the rest of history, it has been glamorized into a lovely day of sharing in bountiful feasts and giving thanks for what one has.

For some people, Thanksgiving is still about giving thanks and spending time with loved ones. At least, that is what some of us would like it to be about. That and overindulging in turkey, pumpkin pie and football.

Instead, retail workers are forced to abandon our families and trudge into work for one of the most frustrating days of the holiday season because for some, Thanksgiving is just about getting a good deal on Black Friday.

The retail store that I work at is opening at 8 p.m. on Thanksgiving in order to stay competitive with other stores. This is only logical on the part of the stores — it is a business, after all, and it needs to make money. Additionally, being open for more hours allows for more customers.

These basic facts of business, however, do not assuage those who are not at these stores of their own free will.

Black Friday hours are just becoming flat out ludicrous, opening earlier and earlier each year and advertising before people have had a chance to take off their Halloween costumes.

Pretty soon, stores are going to negate Thanksgiving altogether and be open for regular hours and start their Black Friday sales a day early, turning Thanksgiving into a dark, commercial joke.

Can we not go back to the time where only the truly committed woke up at the rooster’s crow and withstood the bitter cold to conquer the other shoppers and earn those debatable fantastic sales prices?

By extending Black Friday hours to Thursday evening, stores are usurping the victories of the original, dedicated Black Friday shoppers and shoving a thorn in the side of every retail employee in the nation.

My only hope is that with the increase in Cyber Monday sales, people will begin to turn to the ease and convenience of the Internet to attain great sales — tempering the woes of sales associates everywhere while simultaneously alleviating burdens of the shoppers.