The Board of Trustees named the higher education consulting firm R. William Funk & Associates to assist in the search of the university’s 16th president.

“It was a unanimous decision of the board,” Chairman Richard Pogue said.

R. William Funk and Associates has conducted 375 searches for college and university presidents and chancellors.

The firm is also assisting with the presidential search at The Ohio State University.

As part of the contractual negotiation, OSU is set to pay the firm a fixed fee of $200,000, as well as reimburse the firm for direct, out-of-pocket expenses and an additional cost of $20,000 to cover administrative and support expenses.

According to UA officials, R. William Funk & Associates works only on a retainer basis with its retainer typically amounting to one-third of the estimated annual salary of the executive being hired, plus expenses.

If the UA Board chose to engage in a “fixed retainer fee” arrangement, the fee would be $120,000 plus expenses. 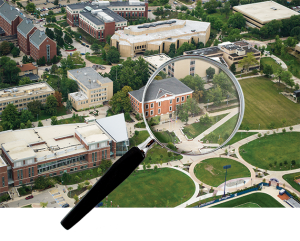 University officials said expenses might include direct, out-of-pocket expenditures (consultant travel, lodging and related expenses) incurred on the institution’s behalf, as well as administrative and support expenses (10 percent of the retainer). Out-of-pocket expenses are largely dependent on how many trips the consultant makes to meet with the search committee or to visit personally with prospective candidates. The university will be billed for these expenses as incurred.

According to university officials, services the firm might provide under the proposal include: researching and identifying prospects; conducting initial screening and outreach activities; coordinating and facilitating interviews; verifying candidates’ educational credentials and references; and assisting in offer, acceptance and the pre-employment process.

“The competency exhibited by the organization based on successful searches around the country and some very high profile searches gives us a great deal of confidence that they will be successful here,” Vice Chair of the Presidential Advisory and Screening Committee Jonathan Pavloff said.

At an August Board of Trustees meeting, President Proenza announced his plan to step down. Pogue said that the average presidential search takes 300 days.

And the Board still stands by their deadline.

“We fully expect to complete the search by the expiration of Proenza’s contract, which is June 30,” Pavloff said.

Pavloff said the names of the applicants would not be made public.

“There are lots of reasons for that confidentiality,” Pavloff said, “the biggest of which is the people that we would like to consider are most likely in high profile jobs and they probably would not want their identity known that they were looking for something different.”