The Zips clinched the regular season title against WMU a week before, defeating the Broncos 1-0 in double overtime on the road.

The Zips got off to a fast pace and never slowed down. With only four minutes played in the match, Akron received their first true opportunity to score. Aodhan Quinn lined up a penalty kick, but a beautiful save by Chase Rau pushed away the chance. The miss stalled the Zips’ offense only for a little while, but in the 11th minute, Quinn got his revenge. 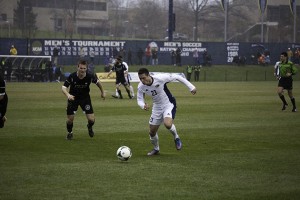 Off an assist by Reinaldo Brenes, Quinn received the ball just outside the 18-yard box. His shot stayed low near the ground, may have taken two bounces by a couple Western Michigan defenders, and then passed the outstretched hands of a diving Rau.

The goal opened the flood gates.

Just a minute and eight seconds later, the Zips scored their second goal. Zac Portillos received the ball about 10 yards out and fired it. Western Michigan was outclassed during the procession, and could do little to stop the more talented squad.

There were other chances in the half, but the score at halftime was 2-0, in favor of the home team.

The Zips were as quick to attack in the second half as they were in the first. Brenes found Portillos in the 49th minute and the ball was put home. Portillos had only scored once in the season before the match. He played a big role in his team clinching the title.

Rau, who played the majority of his collegiate career at Wisconsin, could do nothing to stop the Zips’ newfound offense. Instead, he was often seen with a slight smirk on his face. He realized defeat; the Zips were simply better.

Zips goalkeeper Fernando Piña was not present during the tournament. Despite starting every match of the season up until the tournament, reports surfaced that head coach Jared Embick decided that Jake Fenlason was the better option.

It was a bold move for the program; Piña is highly thought of in the soccer world and has played for one of the United States’ national teams.

Fenlason played well during his time in the pipes. He did not have to face many shots, but only had one blemish in the tournament.

The victory over Western Michigan was their second of the weekend. First, before making the championship, the Zips had to face No. 4 seeded West Virginia in a semifinal match up. The Zips were able to put away the Mountaineers 3-0. 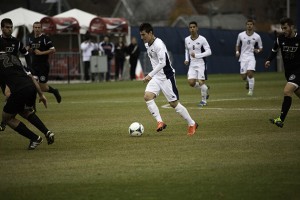 In the match, it took a little longer for the Akron offense to find its step. It was not until the 44th minute, just seconds before the first half expired, that Eric Stevenson was able to find the back of the net. It seemed that West Virginia was anxious to go into the half at a tie and was going to claim that as a small victory.

However, after the goal, their side was deflated and came out lackluster in the second half.

The Zips were able to put up two more goals. One was scored by Quinn and a second was notched by Stevenson.

As the Akron offense woke up and performed to the standard that the previous Akron teams achieved, the defense was just as good.

In the two games, Fenlason only had to come up with two saves. Fenlason saved both of West Virginia’s opportunities but was unable to stop the sole chance that Western Michigan had.

Akron, for most of both games, controlled possession  and did not allow their opponents any opportunities to get a lead on them.

The championship was Akron’s sixth title in seven years. It handed them an automatic bid to the NCAA tournament, where it was announced Monday that they did not receive a top 16 seed. This means that the Zips are only guaranteed one home playoff game.

That game will be played Thursday night at 7 p.m. They will take on the defending national champions, the Indiana Hoosiers.