“Christmas in November” presents the opportunity to hasten the festivities and anticipation of the December holiday; however, this effort to hurry Christmas fails to provide a satisfying November and pressures individuals to prepare well in advance for a holiday that occurs at the end of the month of December.

To quote the popular Christmas carol by Meredith Willson: “It’s beginning to look a lot like Christmas everywhere you go.”

“Everywhere you go” is right. Stores have begun to display the festive holiday merchandise in every window, radio stations have started blasting Michael Bublé’s Christmas album on the regular, and mothers have begun frantically shopping for the best deals on presents for the family.

Is this just the smell of the pine trees and gingerbread driving Americans to eagerly anticipate the holidays and readily prepare for December, or is this an unnecessary rushing of the Christmas season promoted by the media and stores? 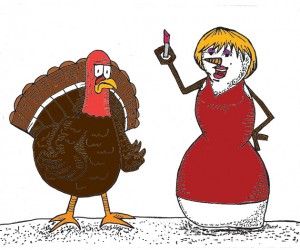 After all, most turkeys haven’t even been purchased for Thanksgiving dinners and some neighborhoods have yet to take down their Halloween and fall decorations.

Christmas is one of the most anticipated times of the year, but starting the festivities a month in advance is an excessive attempt to rush the holiday season, and hearing sleigh bells ringing this early is redundant.

Christmastime has always been a highly celebrated occurrence; the holiday allows individuals time to celebrate family, faith and giving back.

It offers a time to give to loved ones and have consumers partake in shopping for the perfect gift for that special person. Stimulating the economy as well, this season supports stores, both local and worldwide.

The positive aspects of Christmas and the shopping that goes along with it are endless, and these aspects could stay positive if they just stayed in the month of December.

It is justified when browsing stores in October or November, for example, and stumbling upon an item that would make a great gift for someone who came to mind. Or perhaps if there was a great sale at your sister’s favorite store and you decide to stock up on presents to give to her at Christmas.

These examples display healthy dosages of Christmas shopping in months prior to December; yet the out-of-hand running around to get Christmas gifts before December even starts is stressing out consumers and pressuring companies to provide Christmas gifts, decorations and music well in advance to the actual holiday to compete with billion-dollar companies.

Overall, the pressure to shop early comes from stores’ persistence to bring consumers into their shops on special days such as Black Friday for pre-Christmas specials and sales. These sales encourage early shopping, increasing the need to rush the holiday and stretch the festivities into a two-month long event.

Another issue arises when you’re flipping through channels on the TV and come across Buddy the Elf or Charlie Brown playing in the snow. This sparks energy and excitement for the winter holiday.

The realization that Christmas is right around the corner, that it’s time to pull out the heavy blankets, make some hot chocolate and lie around the television set with the family occurs at this moment. Personally, I anticipate Christmas the most when I identify the first holiday special premiering each year on TV.

But when this happens and you realize that it’s only the second week of November, and Mr. Heat Miser has no business being on the television, the excitement of this once-a-year occurrence dies down.

It is almost as if everyone celebrates the December holiday in November, rather than when it actually occurs. The showing of these specials a month in advance to the holiday is an effort to make the holiday, which occurs at the very end of December, start as soon as October ends.

This strikes another question: What about Thanksgiving? Should families pay less attention to the idea of cooking a huge meal to celebrate everything they are thankful for, or rather, should they rush the Thanksgiving meal to rise early for Black Friday shopping in pursuits of the best deals on Christmas gifts?

The month of November has become solely dedicated to preparing for December. With the pressure of Black Friday shopping, having the most festive decorations outside before the neighbors and purchasing the best flavors of candy canes before they are all sold out are just minor examples in the grand scheme of things.

With the complete disregard of an equally important holiday (Thanksgiving), Americans focus too much of their attention and energies to perfecting Christmas and the month of December.

People have it in their minds that once the first of December rolls around, everything should be in order for the events of Christmas.

There is nothing wrong with wanting the month of December to relax, yet this mindset has made everyone want to dedicate November to listening to Christmas music and watching Christmas specials, so that when December actually is upon everyone, the idea of Christmas and its charm is almost excessive and bothersome.

Ultimately, “Christmas in November” is a notion that destroys the celebrations that should happen during the season and month of this holiday. Individuals have every right to start hanging up wreaths and decorating Christmas trees once October ends. However, with an excessive attempt to stretch Christmas into two months, the actual time of the holiday becomes old and tedious quickly.

A bit of advice: save jingle bell rocking for December when there is actually snow on the ground and Santas “ho, ho, ho-ing” in the mall.

Overall, the avoidance of rushing the holidays will increase Christmas spirit while allowing November to be a time that ensures celebration as well.