The two-headed monster of Rachel Tecca and Hanna Luburgh continue to beat up opponents this season for the Akron women’s basketball team (3-2). 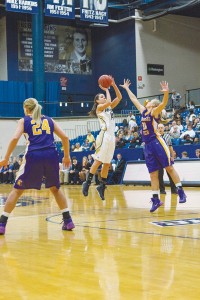 On Friday night, the two combined for 47 points against Canisius College and led their team to a 72-56 victory. It was the teams’ first road victory of the season.

Despite the 16-point victory, the Zips trailed by three at halftime.

Akron had to fight through the deficit even after five minutes of play in the second half. It was a Luburgh three-pointer  that tied the game at 40-all. The Zips then took momentum and used it to run away from their opponent.

Though scoring over 40 points combined is impressive, their timeliness made it even more so. Luburgh and Tecca scored 14 and 17 points respectively in the second half. When their team needed them the most, they were able to come through.

Other players who contributed to the Akron victory were Carly Young, who had 10 points, and Kacie Cassell, who scored five.

The victory was head coach Jodi Kest’s 100th victory as an Akron Zip. 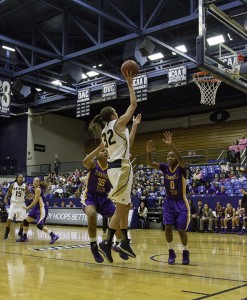