Zips soccer falls in the round of 32

The Zips fell victim to  Coco Navarro’s side volley in the 99th minute. There were only about 30 seconds to go before the first part of overtime was due to close.

The Zips were thoroughly dominated throughout the contest. Marquette outshot Akron 19-15 but controlled possession and the tempo of the match for most of the night. The Zips did not go without their opportunities to close the game, however. The Golden Eagles had the ball at their feet and were attacking a lot.

The Marquette goal came after a Zips defender fell on the play. Akron then only had one defender and their goalkeeper, Jake Fenlason. Marquette’s Paul Dillon had the ball near the left sideline and sent in a lob where three Marquette players were waiting. Navarro caught the ball off his head and was able to deflect it off Fenlason and into the net. 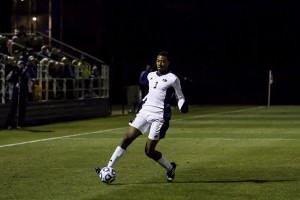 Akron’s best chance to score came in the 75th minute. Zac Portillos sent a shot that went over the head of two defenders and outside the reach of Marquette goalkeeper Charlie Lyon. However, the ball deflected off the post and bounced back into the field of play.

Another chance that the Zips received was in the opening minutes of the second half. Again from Portillos, his shot went just wide right. He had an open look and decided to try to beat Lyon by sending it to the bottom right corner of the net.

Though Marquette had multiple opportunities to score a goal in regulation, they failed to make Fenlason work for his nine saves. Most of the Golden Eagle shots were dribblers, bouncers or softly-kicked shots that UA’s goalkeeper could easily smother.

The way Marquette got to Fenlason was by competing for jump balls with him. Twice Fenlason found himself on the ground after going up against a Marquette player in the air. A dangerous play, the UA goalkeeper was able to hold strong throughout regulation.

The UA defeat did not come without some controversy. First, there were many questions surrounding the Marquette field. Marquette decided to play on their grass field, though they did have an option of moving the game to their artifical turf field, according to the Marquette broadcasters who announced the Sunday night match. The pitch was a bit torn up and many players fell down because of the uneven surface.

Another controversy was officiating.

After the match, the Akron Zips soccer YouTube channel uploaded a video that combined two questionable calls that could have changed the outcome of the match. The first play shows a Zips player being slide tackled while trying to field a ball five yards from goal. The argument is that the Marquette player committed a foul with his tackle and, because it occurred inside the 18-yard box, it should have been a penalty kick. The next play shows an elbow being thrown at a Zips player’s face. It too was inside the box and could have resulted in a penalty kick.

Regardless, the Zips’ soccer season is over. Akron will hope to reload and chase after another championship in 2014.