EJ Thomas Hall is proud to present a show that is sure to knock your socks off —or bust the myth of it anyway. The hosts of “MythBusters,” Jamie Hyneman and Adam Savage, will be performing a live show on Thursday, Dec. 5.

“Mythbusters: Behind the Myths” brings you into the world of Jamie and Adam as they put on a show filled with on-stage experiments, audience participation and behind-the-scene stories. The new show gives audience the opportunity to join the astonishing experiments up close and on stage. 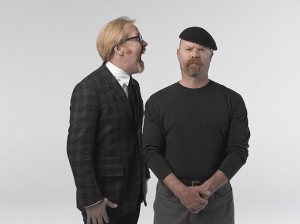 “MythBusters” is an Emmy-nominated television series on the Discovery Channel which seeks to reveal the reality behind popular myths, legends, rumors and movie scenes. The experiments are unlike any other, combining scientific method, cleverness, creativity and humor to either confirm or bust a myth.

The experiments are held inside a workshop unless they are too dangerous to do inside. Most experiments involve construction of various objects — anything from duct tape to an explosive. Anything and everything can be found in the workshop of the “MythBusters” team. The team constructs creative projects to answer questions such as “Are the Apollo moon landing photos fake?” or “Is there a way to beat police speed cameras?” and even “Can plugging your finger into a gun barrel cause it to backfire?”

The show is not only intended for science fanatics. It aims at getting the interest and attention of many different kinds of people, ranging across different age groups.

The show begins at 7:30 p.m. at EJ Thomas Hall. It is family friendly and appropriate for all ages. Students can purchase tickets at a discounted price of $16.50 with a valid Zip Card. If you are not a student, prices range from $35 to $126 depending on seating location.