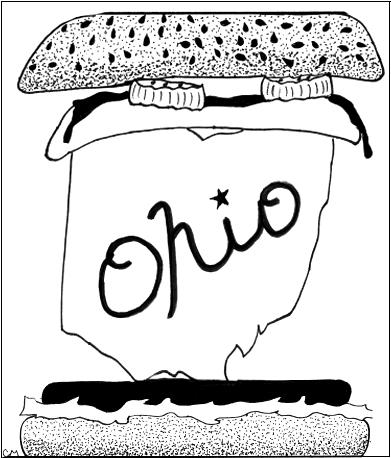 Ohio Burger, The University of Akron’s new burger joint, opened in the Student Union a few weeks ago, so I figured I would give it a try. No better way to end a long day during the first week of school then with a tasty meal. I would even go as far as to say I’m a fan of some American style greasy delicious foods with record-speed service; I suppose I had my hopes up a bit too high.

You could tell the place had just opened; no one really seemed to have a clue on what to do. From the moment I began placing my order, you could see the look of concentration in the cashier’s eyes as she hesitantly punched my order into the screen. My order was simple, a burger and a lemonade, but hey, alright.

Maybe it was her first day. I’ve worked in fast food and I know using those registers can be a little confusing during the first couple shifts.  So naturally, I mentally forgave her. But then she forgot to get me my lemonade.  And even when I reminded her, she moved like a snail.

I had my drink in hand (eventually) and was ready to take my first sip of “fresh” lemonade.  It tasted like a watered down version of lemonade from a packet of powdered artificial flavoring.  The place was already getting on my nerves and I hadn’t even picked up my burger yet.

It was a little after eight, and, like I said, it had been a long day. I did not have time to wait around. The clueless staff ware frantically attempting to prepare the food, but their “fast food” intensity resulted in messing up people’s orders in front of me.  Or maybe it was the excess of people standing back there, some texting. People, go home when your shift is over; do not stand at someone else’s workplace and text!  My anticipated five-minute wait had now turned into ten minutes. The girl next to me looked just as angry as I was, as she waited ten minutes for a milkshake; she wasn’t even waiting for a burger on the grill!

The problem seemed to be they were out of meat. Out of meat? A burger place is out of meat? That would have been nice to know before I placed my order, because then I could have gone to Subway, because the scarcity of meat had not yet plagued their customers. Luckily, though, I can eat relatively anything. I basically demanded that they make me something, even a veggie burger. After now waiting for 20 minutes, I really did not care what I ate as long as it wasn’t going to kill me.

After some various refunding and some order changes for those behind me, everything seemed to be sorted out, minus the outcome of my burger, beef or veggie.

The longest 30 minutes of my life later, I was chowing down on my 100 percent beef burger and sipping on the melted ice cubes in my old cup from the tasteless lemonade.  I would give the burger a 6.5/10. A little above average. Never again will I wait 30 minutes for their burgers, I swear to myself, though I will probably never again have to wait 30 minutes for a burger, witness another meat shortage, nor deal with the uneducated staff.

I took the time to get the scoop on Ohio Burger because my opinion was nowhere near any standard (clearly).  Justin Alley, Ohio Burger and old Sizzling Zone (the previous fast food service in the Union) employee filled me in and gave me hope for a better Ohio Burger.

Probably critiquing a place a few days after opening was a poor idea on my part, especially when I heard about Alley’s first day on the job.

“My first day was really strange, I was used to coming in and getting to work right away when it was the Sizzling Zone. I came into work and because there were so many people for training and such, I didn’t know where to start. Sometimes I stood around and other times I was working or learning something new. It was a very long day, but not difficult,” Alley said.

I guess I wasn’t the only one who noticed the people milling around behind the counter. Alley reassured me that there have been many improvements since my first visit to Ohio Burger. He says that the team is fully staffed for each shift and that orders are getting out in a timely matter. As for the meat incident, it actually happened twice in the first week.

“Guess the managers underestimated how much we were going to sell, which I guess is a good thing in a way,” Alley said. He even went on to say that they had great feedback on the place recently. Perhaps I jumped the gun on judging the new burger joint.

All I can say is that for those of you who did not grab a bite to eat at Ohio Burger during the first week, you made an excellent decision. With that, it’s safe to say that Ohio Burger can only get better. Go ahead and try it, just make sure you don’t mind waiting for an excessive amount of time and the occasional meat shortage…just in case.