The Chippewas have been putting up a fight in the Mid-American Conference, especially against teams they shouldn’t stand a chance against. CMU led Akron for most of the game last week, losing in the last three minutes when they allowed Akron to go on a 9-0 lead to win 68-56. Though they’ve put up a fight, it hasn’t helped them win games – the Chippewas are currently on a six game losing streak. 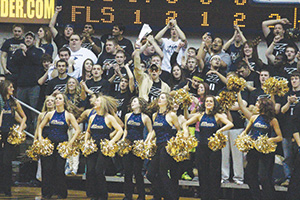 Northern Illinois has seen slight improvement since the last ranking, moving up one position. In the past two weeks they have gone 1-3, thus their movement from No. 12 to No. 11 isn’t something to celebrate.

Miami is yet another team that has put up quite a fight against top-ranked teams Akron and Ohio. The downside for Miami is that they lost both games, and when it comes to any ranking system, wins are more important than losses.

The Buffalo Bills have been able to pull off some convincing wins against non-convincing opponents in the past couple of weeks. Buffalo defeated Ball State two weeks ago, but still has more overall losses. Buffalo, like many of the teams in the MAC this year, does not seem to have much chance of being a contender for the championship.

Ball State was able to pull off a victory against Western Michigan with a last minute 3-point shot. That one victory, however, is the only reason they advance to No. 8. If they cannot defeat Eastern Michigan and Northern Illinois this week, look to see Ball State rapidly fall from contention.

Out of all the teams in the MAC, the Bowling Green Falcons have seen the most improvement. In the past two weeks they have gone 2-2 in MAC play, The two losses coming from the two best teams in the conference. Though a 9-14 overall ranking would not usually warrant a No. 7 ranking, they have been playing convincingly well.

If Kent State was a publicly trading company, you’d want to share any shares of their stock you have. After the Flashes’ decisive loss to Akron, they have gone 2-4 in conference play. If they don’t pick it up soon, they won’t stand a chance for a post-season bid.

The Eagles are sitting at third place in the MAC West division with a 4-5 conference record. Earlier this season, their game against Ohio was postponed because of a shooting near campus. EMU is in perfect position to upset either Ohio or Akron this season.

There has been no change in the top three teams in these rankings over the past couple of weeks. This is largely because each team has continued to win within the conference. Western Michigan maintains their No. 3 ranking because they have lost to both Ohio and Akron. The only chance the Broncos will have in moving up is winning every remaining game this season, as well as Ohio and Akron losing a handful of games each. With the Bobcats and the Zips playing at such a high level, that scenario is highly unlikely.

Ohio’s performance over the past few weeks has shown the nation that the MAC championship battle is between Ohio and Akron. Ohio has decisively beaten every conference opponent except Akron. Last year, Akron and Ohio split the season 1-1, meaning there is plenty of room for Ohio to move up if they can defeat Akron later this month.

The last time I power ranked the MAC, I was cautious about ranking Akron No. 1. Since those rankings, Akron has solidified their right to the top spot by defeating Ohio and Buffalo (who they were unable to beat last year) as well as beginning to receive votes for top 25 in the nation. Though Akron has proven that they deserve to be seen as a serious team in the national spotlight, the Zips also have the position to lose big. In the past couple of weeks, the Zips have been struggling in the first half against bottom ranked teams such as Central Michigan and Miami. Akron is having an incredible season, but they cannot afford to rest on their current successes. The Zips have to continue winning if they want to be viewed as national contenders.