It’s really a tossup between Ohio and Kent State for the bottom spot. Kent 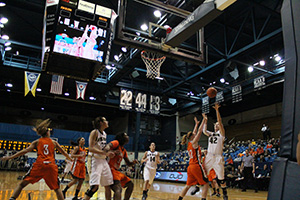 has the lowest overall record, so they get the honor of last place. Three overall wins in the season is absolutely atrocious. The Flashes should use the rest of this season to learn what they need to build upon for the future.

Ohio is 0-11 in conference play, the Bobcats stand absolutely no chance to contend for the championship this year. They are in a similar position as Kent State – better luck next season.

The bottom three hardly ever change in these rankings because they are simply that bad this year. Northern Illinois stood, and still stands, the best chance of improving on the season. The Huskies defeated both Ohio and Kent State, but that doesn’t do much towards post-season aspirations.

A lot of Ohio State fans would probably be happy to know that even in the MAC, Michigan doesn’t seem to be very good. For more commentary on the bottom-dwelling Michigans, refer to No. 8: Western Michigan.

With the exception of highly ranked CMU, Michigan schools have not been doing well in conference play. Eastern and Western Michigan have cohabitated near the bottom all season. Western Michigan does have a couple of marquee wins against Akron and Bowling Green. The major downside is that they are 5-6 in conference play. Though they have played impressively at times, there is absolutely no reason to think that they will be serious contenders for the championship this year.

Buffalo had a difficult stretch of games over the past couple of weeks. The Bulls lost three out of four games, losing to Akron, Central Michigan and Bowling Green. Though they have not been able to defeat any of the top teams, they are playing well enough for tournament consideration. The Bulls play Miami and Ohio this week, and wins in both of these games will help Buffalo’s chances of being seeded higher in the conference tournament.

Miami, like Buffalo and Ball State, has had quite a good run in conference play this year. The downside is that they haven’t been able to get the marquee win that would boost their power ranking stock. The Redhawks have played Toledo, Central Michigan and Akron in the past two weeks, losing to each team. If they continue to play as well as they have all season, they will be in the conference tournament without a doubt. Just don’t count on them upsetting everyone by becoming the MAC champion.

The Cardinals are sitting at 8-3 in conference play, which is impressive, to say the least. Despite playing well in the conference, they have yet to defeat any of the top teams. Though their overall conference play may warrant a post-season run, their inability to beat the top teams makes it less likely that they will be serious contenders for the championship this year.

Having lost to Akron previously in the season, as well as Western Michigan this past week, the Falcons have been pushed back to No. 4 in this week’s rankings. Though they have impressive offensive and defensive play, they are one game behind Akron in the MAC East.

The Lady Zips have certainly been able to turn things around in the past two weeks. They’re back on top of the MAC East and they are in position to compete for a top seed in the conference tournament. Akron has continued to maintain the highest scoring offense in the conference throughout the year, with junior guard Sina King becoming the top scorer for the Zips. The best feature of this Akron team is that they rely on the effort of the team as opposed to individual players’ efforts. In other words, the Zips live and die by the team and not one player.

Central Michigan has gone 2-2 since the last rankings, and have lost first place to Toledo. The Chippewas rely heavily on forward Crystal Bradford, but without equally strong players on the bench, Central Michigan simply couldn’t hold onto the top spot. Still, with impressive wins over Akron and Toledo earlier in the season, there is no reason to give up on the Chippewas.

Despite losing to Central Michigan earlier in the season, they have advanced to 10-1 in conference play, and have an impressive 10-game winning streak. Toledo has the momentum within the conference, and unless someone is able to defeat them in the next several weeks, they will continue to be the favorite for weeks to come.