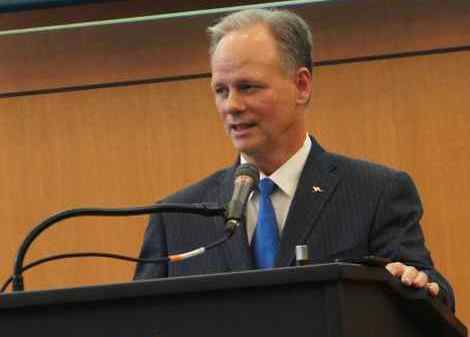 The University of Akron’s search for the 16th president is over. May 8 ended the search when the Board of Trustees at the university elected Scott L. Scarborough to be UA’s next president.

Scarborough made his first appearance as the university’s next president in a public forum on May 12.

“I believe that leadership is important, but it’s just a piece of the puzzle. I simply just want to be a great president. If I can do that, I will empower other people.” Scarborough also added, “My career evolved in ways I couldn’t imagine. There’s nothing more energizing than the students and connecting with students. There’s something noble in working in higher education.”

He and his wife, Tammy were introduced by the Board Chair, Richard Pogue, and then embraced by President Luis Proenza.

Proenza has dedicated the last 15 years to his presidency at The University of Akron.

“Scarborough has a vision and the management experience to lead UA to the next and necessary transition,” Progue said.

The speech that Scarborough gave explained a plan for his first 90 to 100 days in office. The new presidency begins for Scarborough July 1. Scarborough emphasized on the importance of relationships, explaining these days are the most important to meet and get to know one another.

“A lot of time will be spent listening to these people and synthesizing their input as a foundation of what should be done,” Scarborough said

He spent four years as Senior Vice President for Finance and Administration for both the University of Toledo and the Medical Center.

Scarborough’s transition here to UA includes moving his family from Toledo to Akron. His wife, daughter and in-laws are fully supporting the family decision.

Tammy was the chief financial officer for University of Toledo’s Physicians. She is now spending time with family while looking for a health care position in the Akron area.

Tressel was selected to be president for Youngstown State University and will begin his presidency the same day Scarborough takes his chair as president of The University of Akron.