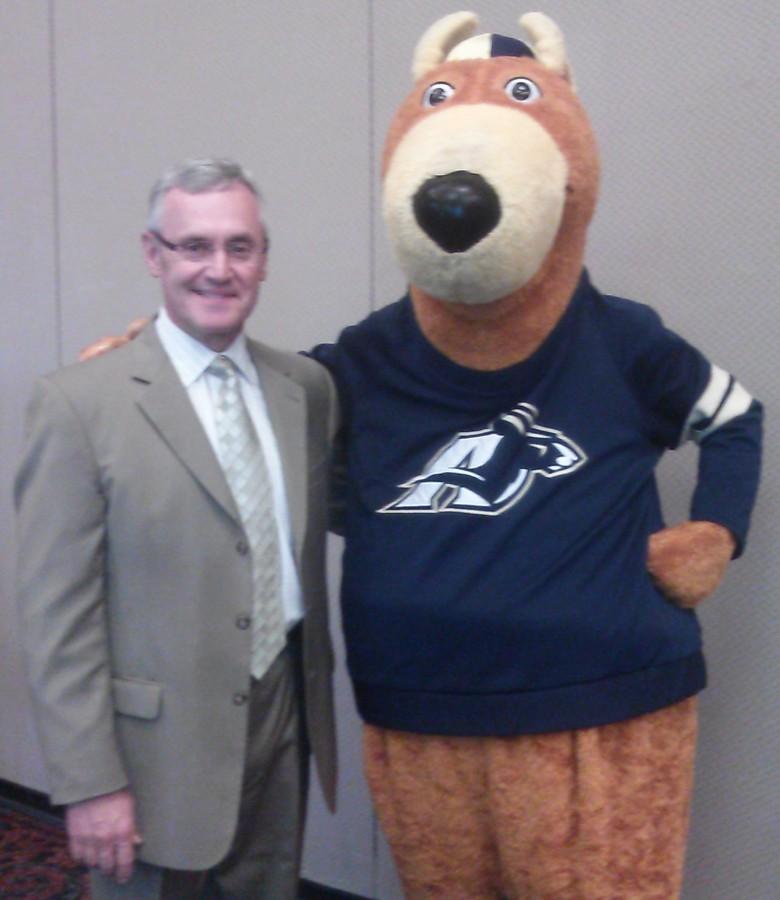 Jim Tressel and Zippy pose for a picture at Tressel's farewell reception.

On May 27 the University of Akron honored the two-year service of Jim Tressel, the former Executive Vice President of Strategic Engagement, on the third floor of the Student Union. The ballroom was packed with Tressel’s friends and colleagues. Refreshments were shared as UA employees bid Tressel farewell. A blanket gathered signatures by his friends and co-workers as the reception went on.

Jim Tressel has recently been selected as the president of Youngstown State University, a four-year college less than an hour away from UA. Along with Scott L. Scarborough of the University of Toledo and Ronald Nykiel of the University of Maryland East Shore, Tressel was a finalist in the selection process for a new president in replacement of the outgoing president Luiz Proenza.

In the end, Scarborough was chosen as the next president of UA. Tressel described Scarborough as being a “wonderful choice” for a new president.

Stacey Moore, the Associate Vice President for Student Success, took the podium and spoke of Tressel with familiarity.  She noted how over time Tressel became less harsh. Knowing his background as a football coach, Moore was surprised how empathetic Tressel came to be. She praised his newfound ability to tone down his football mentality and adopt a friendlier approach to situations. Moore proudly called Tressel not only her boss for the past two years, but also her friend.

Cassie Verardi, the Assistant Director for the Akron Experience, worked under Tressel and praised his leadership skills and vision. Verardi saw these attributes in action during New Roo Weekend.

“I am obviously very sad about it. He will be greatly missed and he will do well at YSU,” Verardi said.

A colleague of Tressel, Victor E. Pinheiro, recalled Tressel being hired by Coach Jim Dennison as a Graduate Assistant. While obtaining a master’s degree Tressel taught Principles of Coaching.

“He is more than a coach. He is a dynamic leader,” Pinheiro said.

Tressel brought a selection of NFL coaches and ex-NFL players to UA for his classes. During his second stint at UA Tressel taught as well, but with new experiences to further improve upon what the former coach taught in class.

Tressel was mobbed by his supporters until he took the stage for possibly his last time at UA. A box full of sentimental items was given to Tressel as a gift. Each memento was itself an inside joke.

Tressel sentimentally reflected on his time at UA. He recounted tales from the beginning of his tenure at UA to his swiftly approaching departure.

“I will always remember Akron as the first place that gave me a chance. Akron believes in people,” Tressel said. “I didn’t do anything by myself. I got a group of people trying to push the envelope.”

A round of applause in his honor resonated throughout the room. After Tressel withdrew from the stage, he returned to shaking hands and mingling with the crowd.