USG president and vice president have been sworn into office. 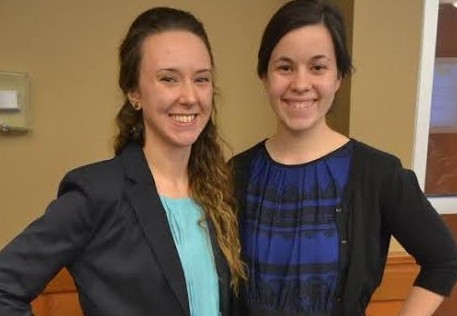 Chelsi King and Rachel Bodenschatz showing excitement for the up and coming year.

In the wake of the 2014 Spring Semester there were a large number of positions that were filled at The University of Akron for the 2014-2015 school year. The most publicized was the election of a new president for the university. However, Undergraduate Student Government elected a variety of officials during the 2014 USG elections. Over 1,000 votes were cast and 13 senators were sworn in. The most prestigious positions of the student organization were usurped as well.

Chelsi King, an English major, became University Student Government President. King found her vice president in her fellowship with Rachel Bodenschatz. Both King and Bodenschatz are seniors at The University of Akron and Ohio natives.

King had previously served as a senator for two consecutive years in USG. Bodenschatz, the new vice president, was an Executive Justice two years prior. In the following year she continued to serve in USG as the Chief Justice.

“We didn’t seriously consider it until we were encouraged by other people. People told us we work together really well,” King said.

King is a double major in English and Adolescent/Young Adult language while Bodenschatz also majors in English while having a second major in History. The main opposition of the two English majors was the duo Greg Christopher and Ricky Angeletti.

“It could have gone either way,” King said.

According to the duo, the three-week process of election was grueling.

There are 26,000 students on campus. The winning duo tried their best to reach all of them. After the election, Bodenschatz took a sigh of relief.

“Realizing that we reached that goal together was amazing and overwhelming,” Bodenschatz said.

The new president and vice president don’t necessarily plan on making changes, but making improvements. One of these is relations between USG, Reslife, and Greek Life organizations. King and Bodenschatz firmly believe that strengthening ties and cooperating with these core organizations is important to reaching their goal under the new regime.

During their campaign King and Bodenschatz came across a recurring concern of individuals not feeling represented. “We can be a gateway for them to be heard,” King said.

They plan to interact with a vast array of students in the coming semester. Meeting freshman at New Roo Weekend will be a big part of the course of action planned by the new President and Vice President. King and Bodenschatz feel confident and ready to lead the student body in the approaching fall semester.