Shatterproof screens come out of UA

The screens that will save smartphones. 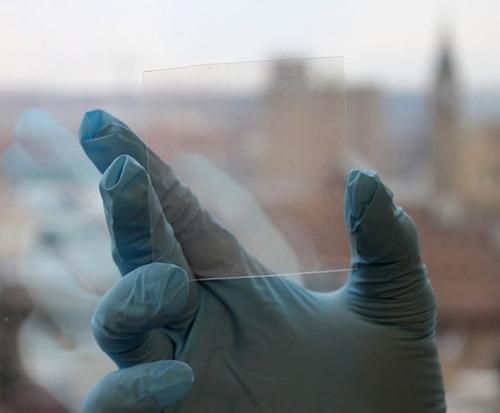 Transparent shatterproof touchscreen's created out of UA for the world to enjoy.

Research in the Polymer building is making dreams reality with a new innovative attempt to create a shatterproof smartphone screen. Yu Zhu and a number of his colleagues published an academic paper titled, “A Tough and High-Performance Transparent Electrode from a Scalable and Transfer-Free Method.” In it they describe the specifics of their creation. Specifically, the goal that the group set out to accomplish was creating a transparent electrode.

The team that worked on this project consisted of Zhu, an associate professor here at The University of Akron. Aozhen Xie, a Ph.D student in the Department of Chemistry, and Tianda He, who graduated with a Masters in Science in Polymer Science in 2014, assisted Zhu in this venture. Also, Darrell H. Reneker, a distinguished professor in the Department of Polymer Science, provided equipment as well as suggestions to help the team on their journey.

The decisive leader of the group, Zhu emphasized that the idea of a shatterproof screen was conceivable by anyone, but the method to achieving a successful prototype was another story.

Zhu asserted that there were an innumerable amount of approaches possible, but many of them had drawbacks. The highly sophisticated “electro-spin” technique worked best for the group for spinning the Nano fibers.

“We struggled a long time trying to find a good technique,” Zhu said.

The team administered a test over 4,000 times on the prototype. During a demonstration, the prototype worked well and was subject to several tests that assessed durability and practicality.

The group plans to collaborate with the cellphone industry to commercialize their work and build from the prototype. Zhu has big plans for this project. He and the team are working in hopes that their research will lead to the product’s use in cellphones, laptops, to even televisions in the future. Their masterpiece, a shatterproof screen, highly durable and cost effective.

“Everyone has a touch screen device. Americans pay millions for touch screens every year,” Zhu said. He goes on to allege that the same amount of money is comparable to the costs of presidential campaigns.

Since the technique to develop a transparent electrode leads to a cost-efficient solution the group’s work is nearly ready for a commercial venture. The University of Akron’s rights to the patent could bring in a stream of revenue for years to come.

Ohio colleges as a whole have had research expenditures increasing for a number of years, and this amazing breakthrough shows that the federal support has not been unfounded. In 2007 the Association of University Technology Managers ranked the University of Akron No.1 for technology transfers and licensing efficiency and with this new innovation it is likely that the university could climb to the top of the ranks once again due to Zhu and his teams extraordinary discovery.