Scarborough spends his first day as president meeting the community. 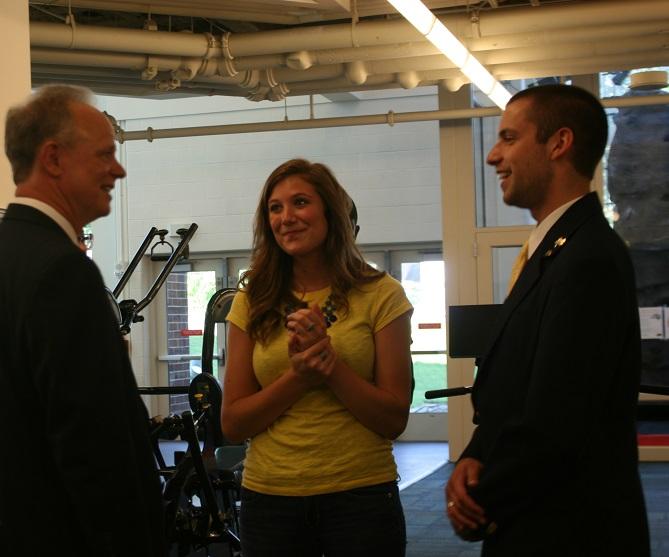 President Scott Scarborough talks with students at the Rec Center on Scarborough's first day on campus.

On July 1, students guided new President Scott L. Scarborough around campus. Scarborough was excited to get the chance to talk to some students as well as meet some faculty members in what is now Scarborough’s new place of work.

“I’ll be ready for the first game,” Scarborough said holding his bag of UA athletics goodies. Scarborough told the small crowd his favorite sport to watch is college football, but he also enjoys watching college basketball.

“City feels like it’s in a nice upswing,” Scarborough said.

At the Student Recreation and Wellness Center (SRWC) Scarborough explored the natatorium and heard about the recent success of the women’s swim team.

“I don’t think the schedule is going to allow it,” Scarborough said gazing at the rock wall and contemplating climbing it.

Previously, The University of Toledo employed Scarborough. Before his tenure there, he lived and worked in Chicago. He finds life in the Midwest enjoyable.

“I like the seasons,” Scarborough said. The tour spent time outside in the sun visiting the new tennis courts on campus and enjoying the scenery that UA has to offer.

Of the ten residence halls at UA, Scarborough visited Spicer Hall. He talked about how dorm safety is a priority along with the safety of the entire campus.

Since The University of Akron is home to a plethora of international communities, Scarborough touched on how he would accommodate international students.

“I’m simply going to reach out to them and make sure they know about the services that are unique to them,” Scarborough said. “The world is getting smaller and people are communicating and interfacing with each other more than ever. It’s a win-win.”

Scarborough visited a STEM class on the third floor of Simmons Hall. He greeted the incoming freshman with sincerity.

“I’m kind of a freshman too. I’m looking forward to seeing you all in the fall,” Scarborough said.

Along the way, Scarborough was fortunate enough to get an autograph of UA’s iconic mascot Zippy.

“My daughter loves you,” Scarborough said as he shoved the autograph from Jessica Deluca into his pocket.

He stopped at several offices in Simmons Hall to greet staff. The Office of Accessibility and the Admissions Office received visits from him and the small crowd.

Scarborough plans on taking UA to new heights during his presidency.

“It’s always about taking the next step if you’re given the opportunity,” Scarborough said.

After visiting a couple of classes taught by Lynn McKnight and Department of Economics Chair Michael Nelson, Scarborough announced his favorite part of the tour was interacting with the students and staff.

“The students are always the best part of the job,” Scarborough said.

Local business, Manny’s Pub, tweeted at President Scarborough asking him to visit for the United States’ World Cup game against Belgium. Scarborough made it a point to go watch a portion of the game at the local pub.

He ended his first day with a warm embrace from the UA community before proceeding back to the historic building known as Buchtel Hall.

Scarborough was born and raised in Houston, Texas. In high school his position was running back, but was later moved to wide receiver in his senior year. Scarborough said he lived in Texas for nearly forty years. Nowadays, he is an avid golfer and he plays tennis to stay in shape.