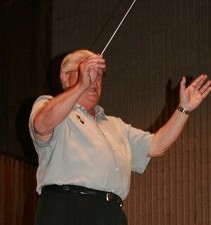 Robert Jorgensen as he turned to the crowd during "The Star-Spangled Banner."

This year marks the 200th anniversary of our nation’s national anthem, along with the 150th anniversary of the end of the Civil War. The University of Akron threw a celebration of America’s history with a concert of patriotic favorites by the Summer Symphonic Band.

“Born again to each generation, born strong once again, to each American,” Conductor Robert Jorgensen said.

The free and open to the public anniversary celebration was held on July 8th in Guzzetta Recital Hall. America has many traditions, one being singing “The Star-Spangled Banner,” a song every American knows. The band consists of students, alumni and community members.

UA Professor Emeritus Tucker Jolly was also featured in the evening. Jolly, a “tubist,” played a solo for the crowd.

“I am pleased and honored to perform at the concert. I appreciate Mr. Jorgensen for the invitation to play with the band,” Jolly said.

The band performed works by composers John Williams and Henry Fillmore. The composers did not perform themselves at the celebration, however the band covered both famous composers’ works.

Williams’ is a famous composer who is known for his works in films such as “Jaws” and “Star Wars.”  He is mostly known for his patriotic piece of work called “Liberty FanFare.” This work was created to celebrate the centennial of the Statue of Liberty.

Fillmore is known for writing marches for bands to conduct. He is most known for the song “Men of Ohio March.” This patriotic song was in dedication to Warren G. Harding, the 29th president of the United States.

The entire crowd stood as the band began to play the national anthem. Almost halfway through the song, Jorgensen turned to the crowd and conducted the band while bringing the voice of the audience in by singing “The Star-Spangled Banner.”

The song originates from the War of 1812, during The Battle of Baltimore. On September 14, 1814 the British bombarded Fort McHenry. The flag, which flew at the fort, survived through the night, providing the inspiration for Francis Scott Key’s song, “The Star-Spangled Banner.”

Over 1,800 bombs flew through the air that night. The song was written by exactly what Key had experienced that night. Through the bombs, the flag’s survival became a perfect illustration of America’s endurance.

“The gift of freedom, not freely given,” Jorgensen said as he spoke to the audience.

America has fought many battles throughout its history. None are to ever to be forgotten, however this year we celebrate a specific war, the Civil War. Roughly 620,000 soldiers died fighting a war to bring our nation together.

The Civil War marked a time in America’s history where our nation tore itself in two. The fight to keep the nation together ended in April of 1865, however America began to restore itself 1864.

This year America and UA celebrated the history of our nation’s national anthem and the Civil War by bringing the community together. The night concluded with a meet and greet with Jolly and some of the band members over refreshments. This gave audience members a chance to thank the band and Jolly for the patriotic works performed.