The Browns take InfoCision by Storm 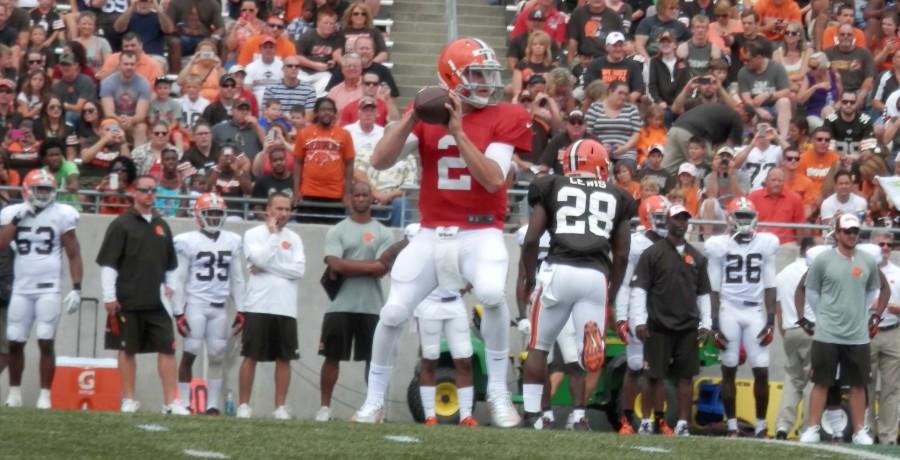 Johnny Manziel stands in the pocket at InfoCision.

The InfoCision Stadium-Summa Field was nearly packed to the brim on August 2 as the Cleveland Browns held a team scrimmage staring rookie quarterback Johnny Manziel.

Tickets sold out the same day they became available. The game was cut short due to weather, but football fans still reveled in excitement at seeing the aptly nicknamed Johnny Football take the field.

The Family Day Event taking place outside of the stadium was open to people who did not have tickets to enter the stadium.

The Family Day event gave UA a chance at becoming the new location for the Browns’ training camp. The training camp has been narrowed between the cities of Akron and Columbus. The decision as has yet to be decided.

Sponsors had set up a number of events that were available for children and parents to participate in.

ESPN had a Wheel of Fortune event while Radio Disney enamored children with interactive dance segments. Also, a bouncy house was set up for children.

The radio station 97.5 WONE rented a dunk tank for the occasion. The most crowded activity was the zip line. People waited in a line that spanned from Vine Street to campus just for the chance to zip across a short distance.

Food trucks were also spread around InfoCision stadium. Wholly Frijoles and The Orange Trük were among the group.

“We’re new to the Cleveland area, so we’re trying to get used to the culture,” said Adam Lantvit, a Wisconsin-born father attending Family Day with his infant son.

Lantvit admitted that he will always have an allegiance to the Green Bay Packers, but also said he recently bought season tickets to the Cleveland Browns games.

The doors opened for fans at 9:30 a.m. and when the floodgates opened, people rushed to get seats as close as possible. President Scarborough, a fan of college football, took the field early and posed for pictures.

Soon players took the field to begin stretching and warm-ups in full padding. By this time, Manziel was on the field and the crowd roared as his visage graced the turf. Manziel was the all-star among college quarterbacks, so it was only natural that his following would grow after being drafted into the Browns in the first round of drafts.

The Browns’ linemen were seen practicing blocking and driving drills. Wide receivers and defensive secondary participated in their respective drills.

Early on, Manziel was criticized by a few hecklers for a couple of shortcomings in the drills. A bad pass, or even a dropped pass, was met with light rumbles of disappointment from small sections in the stands, but the 6-foot quarterback warmed up. At the end of the drills he even did his personalized handshake, a reference to his Drake fandom.

Manziel did not start the scrimmage as the quarterback. Veteran quarterback Brian Hoyer began the game as quarterback. The first play was a blunder for the offense and a triumph for their defense, yet this was business as usual for their defense. Ohio State Strong Safety Donte Whitner sacked Hoyer, but eventually the six-year veteran led a charge down the field.

After the drive, Manziel took the field and the crowd erupted. Unfortunately, Manziel did not play well for his first drive, mostly due to the playmaking abilities of Pro Bowler Joe Haden. This led to a 3 and out with a punt courtesy of Billy Cundiff.

Later, after the other quarterbacks had their reps, Manziel heated up with a first down run and even a fourth down conversion. His rally was met with a chant of “Johnny Football.”  The crowd erupted with applause when he threw a pinpoint pass to a wide receiver in the end zone against his own shutout defense.

Barkevious Mingo, the linebacker who grabbed an interception from the air during scrimmage,  admitted he was not a fan of turf fields but said he enjoyed playing at InfoCision Stadium. He liked the fact that InfoCision was a fairly new stadium.

“It was nice. It was easy to play on,” Mingo said.

The intrasquad scrimmage went smoothly even with all of the packed lower sections of InfoCision stadium.