Akron welcomes back James with celebration 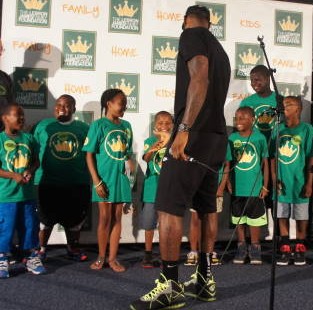 James greets some kids involved in his Wheels for Education program.

James has returned. James has signed a 2-year contract with the Cleveland Cavaliers.

LeBron James’ second coming took place on Friday, August 8 and over 20,000 people showed up to show their support.

The homecoming was a welcome back for James, but also marked the start of the celebration of James’ annual Family Reunion Barbecue for his Wheels for Education program.

“As a parent I’m trying my best to make these dreams a reality,” James said. Wheels for Education is a program that James started through his LeBron James Family Foundation where he incentivizes kids to excel inside and outside of the classroom. This is a program that helps children to excel in school and to not drop out. The program also encourages higher education for all.

“LeBron James is a better person than he is a basketball player,” Mayor Donald L. Plusquellic said.

When the Cavs won the lottery for the No.1 pick in the 2014 draft, even critics agreed with the Cavs’ choice to draft Andrew Wiggins from The University of Kansas. Wiggins, a nineteen-year-old shooting guard, was projected to be drafted in the top 3 picks in the NBA Draft. His counterpart, Jabari Parker, has nearly identical stats, but would crowd the small forward spot if the Cavs had drafted Parker.

The added depth in the preceding weeks aided in James decision to return to the Cleveland Cavaliers. He answered a multitude of questions in a letter to Lee Jenkins of Sport’s Illustrated.

In his letter, James reflects on his growth and he touches on Cleveland’s reaction to his decision and his time as a Miami Heat. James shows regret for how he left, but he stood by his decision to leave the Cavaliers. James dropped the names of several of the Cavs roster and expressed excitement at working with the Cavaliers this year, as well as his good friend and longtime teammate Anderson Varejao.

“I’m happy about it. It’s a win-win. There are not many situations where everything is good for everyone,” UA Men’s Head Coach Keith Dambrot said.

Dambrot coached LeBron at Akron’s St. Vincent- St. Mary High School. Dambrot and his team have had tremendous success with the basketball team. The team even competed in the NCAA March Madness tournament two years ago.

“He was one of the easiest guys I’ve coached. He’s very bright,” Dambrot said.

Dambrot was the last to coach James’ before entering the NBA draft. The two have kept correspondence since then.

“It’s not often that you get the opportunity to coach one of the greatest players of all time,” Dambrot said.Like most former coaches, he is part of James’ support system.

Ahmad Crum- the announcer for the Cavaliers, and Cavaliers legend Austin Carr took the stage to welcome LeBron James to Akron. Skylar Grey made a surprise appearance and performed her single “Coming Home” while playing piano on stage.

When James took the stage he was taken back not just by the recording artist’s performance, but by the crowd’s enthusiasm.

“Damn it, I love y’all. I miss this home cooking,” James said.

He shifted the focus from himself and onto the children involved in the Wheels for Education program. They surrounded the stage in chairs with their families on Summa field.

James was born and raised in Akron and has continued to support his alma mater and the city even through the turmoil of the bitter depart in 2010.