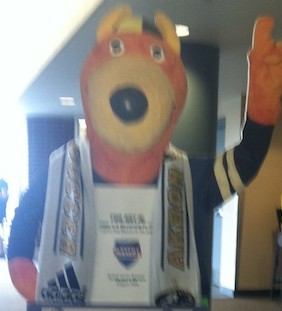 Vote for Zippy At UA Pride Day in the Student Union.

On Aug. 28 the Student Union was full of school pride in honor of UA Pride Day. A day for the students to get a chance to look at what amenities UA has to offer.

The event focused on getting students to start wearing more UA gear and get involved with the school.

“This event is always pretty popular for us, we had about 300 students stop by today,” Assistant Director of Student Life, Allison Doehring said.

Starting at 11 a.m. and going until 1 p.m., the event had everything to help get students involved at UA. There you could sign up to be a part of the AK Rowdies who attend almost every sporting event UA has to offer.

Student Life was also having two separate raffles that gave students the chance to be more of apart of Akron. If you were already wearing UA attire you were entered into a raffle for a $25 gift card. The other had a raffle where you wrote “I love Akron because…” which entered students into a chance at a $10 gift card.

A computer was set up at the event, so you could vote for Zippy to be the Capital One Mascot of the year. Zippy had won the award in 2007 and was a finalist again in this year’s challenge.

Popcorn, cotton candy, and a photo booth for students to get pictures together were offered on the second floor in the Student Union. “I liked that everything was interactive there, like the voting for zippy and tweeting to get free gear,” said UA student, Erik Leib.

Also at the event was a calendar of upcoming events that will be held at The University of Akron, in an effort to notify students of all the activities available to them.

Free thunder sticks were handed out to the first 150 students who tweeted about UA Pride Day to The Department of Student Life’s twitter account. Every student who stopped by also got a free megaphone to take to the first home football game that evening.

UA Pride Day was able to reach many students and get the word out about everything happening on campus along with raising awareness about being a proud zip.